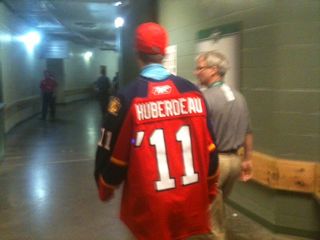 PITTSBURGH – Dale Tallon has had one of the best views in the house at the past two NHL drafts, the Florida Panthers team table set up right near the stage.

When you have high picks, you sit near the action.

The Panthers will be in the back of the room when the draft starts Friday night – and Tallon couldn't be happier. For having a lower pick means you did something right during the season.

Florida finished last in its division the previous two seasons and had the third overall pick each time. This past season, the Panthers went from worst to first and claimed the franchise's first divisional title. Instead of picking in the top five, the Panthers pick 23rd.

“Going from three to 23 is huge. It's a big jump,'' Tallon said Thursday afternoon after a full day of traveling east from the NHL Awards in Las Vegas.

“That's where you want to be. You have to pay a price to pick one, two, three, four or five. Hopefully to get to where you're in the last row for a long time.''

The 2012 draft will be held at the Penguins' Consol Center starting with the first round Friday at 7 p.m. (NBC Sports Network). The second round will start Saturday morning.

Florida has a total of five picks – unless Tallon swings some deals. Tallon is expected to be busy as usual. Whether he has trading partners remains to be seen.

In the previous two drafts, the Panthers had a very good idea whom they were going to take. In 2010, defenseman Erik Gudbranson was the no-brainer pick

This time around? Florida has a good idea of who will be available when its pick comes up. But there are a lot more intangibles this time around meaning more homework for amateur scouting director Scott Luce and his crew.

“We have a range of players we're talking to,'' Luce said. “We spent a lot of time with a lot of players; the due diligence for us has almost tripled because we're picking 23rd. We're going to get a player who will play in the NHL.''

Florida feels it can get an impact player with the 23rd pick. In 2010, the Panthers took winger Quinton Howden at 25.

“Whether it's the 23rd or the third, they are still important picks. You still have to do your homework,'' Tallon said.

“We have to make the best of this situation. We're going to get the best possible player at 23 that fits our needs. We have a ballpark of guys. Last year we had three on the list. Right now it's 50 or 60.''

() Tallon said there has been no change in status with unrestricted free agent Jason Garrison, although he will continue to speak with Garrison's agent at the draft.

Garrison can walk away from the Panthers on July 1 if a deal isn't reached. Tallon said Florida has a deal on the table.

Tallon also said no team has contacted him regarding trading for Garrison's negotiating rights.

Florida traded the rights to Jay Bouwmeester at the 2009 draft.

Played in 355 NHL games; Traded to Chicago last June and spent most of season in minors

Played in 42 NHL games; Traded to Winnipeg last July and spent most of season in minors

Has played in 198 games with Panthers over past three seasons

Played in 72 games with Panthers as a rookie last season

Expected to play with Panthers this season