TIME TRAVEL BACK TO 2010: Dale Tallon Takes Over as Florida Panthers GM 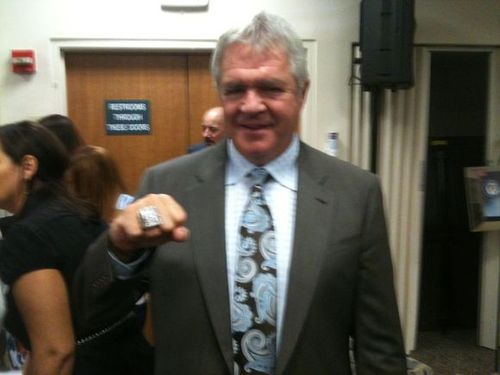 One of the first things Dale Tallon did when introduced as the new general manager of the Florida Panthers was thank the Chicago Blackhawks.

"Without them I wouldn't be here,'' he said, pausing for comedic effect. “In more ways than one.''

Perhaps the Panthers should be thanking their peers in Chicago for letting Tallon go. It's apparent the success-starved Panthers are happy to have Tallon in charge of righting the ship.

The Panthers haven't made the playoffs in an NHL record tying nine seasons and record-setting 10 years. The Blackhawks, a team built by Tallon, is currently playing in the Western Conference finals for the second straight year.

“When I found out Dale was available and interested, that's where I went and I never wavered from that,'' said alternate governor Bill Torrey, who led Florida's search for a new general manager the past two offseasons.

“Hiring Dale, I think, as in short a time as I think he can do it, we're going to have a hell of a lot more exciting days and games in this building in the month of May. It's been a while since we've had it, and I'm firmly convinced he can bring us back to that.''

Added managing partner Cliff Viner: “We promised a professional, well-run organization that we all can be proud of. We're making good on that promise today. He's a proven hockey leader who was genuinely excited to join our franchise.''

Tallon's first order of business as the Panthers new executive vice president and so-called 'hockey czar' is to fly to Germany to meet with head coach Pete DeBoer.

An assistant coach for Team Canada's entry in the World Championships there, DeBoer will indeed return for his third season behind the Florida bench. Tallon says he just wants to meet up with his coach to talk about the future of the Panthers.

DeBoer, who has two years left on the contract signed in 2008, has two assistant coaches with expiring contracts. Amateur scouting director Scott Luce's job also appears to be safe.

Tallon replaces Randy Sexton, who spent less than a year on the job. Sexton was the interim GM last summer after Jacques Martin left to coach the Montreal Canadiens. Torrey held a search for a new GM last summer, but with the team's ownership in flux, the decision was made to let Sexton take over the job fulltime on Oct. 2.

Sexton is said to be traveling back from the Memorial Cup in Canada. Sexton's contract is thought to be expiring this summer – general partner Stu Siegel refused to confirm that – although Sexton could stay with the franchise in some capacity.

Sexton is known to be a good salary cap analyst and an expert when it comes to the collective bargaining agreement and could return to his role as the assistant GM. Sexton is also very close to Pittsburgh GM Ray Shero and could possibly end up with the Penguins organization later this summer.

“We're going to evaluate everything and see what's best for both of us,'' said Tallon. “This is a great game and a tough business. I just went through this in Chicago and it's never easy. Randy is a class guy and a wonderful guy. I know him a little bit, and he's been first class every time I talked to him. We'll have good talks moving forward.''

Siegel said that Sexton was told in a meeting a few weeks ago that Torrey was resuming his search.

“We want to bring in the best people available,'' Siegel said. “We didn't want him to find this out through the grapevine.''

Sexton, however, had been going about his business as if the job would remain his. He said as recently as last Thursday that he felt there would be no change.

This is an important offseason for a franchise that had one of its worst seasons in recent memory. After finishing tied with Montreal in points for the eighth and final playoff spot in 2009 (the Panthers lost a tiebreaker), Florida imploded in 2009-10 and ended with the third-worst record in the entire league. For the first time in franchise history, the Panthers finished last in their division.

Yet that sad finish could be beneficial to the future. Sexton picked up two extra second round picks in the upcoming draft through trades and Florida holds the third overall pick. The Panthers have nine total picks – a number that could grow if Tallon decides to wheel and deal. Tallon was noncommittal to what the Panthers would do with the third pick.

Tallon also said each and every player would be evaluated but he's open to talk trade. Tallon says he would like to beef up the center position as well as find some more defense in the coming months. Tallon praised Dmitry Kulikov, Stephen Weiss, Nathan Horton, David Booth and Tomas Vokoun.

“I watched a lot of games from Vero Beach and I came to a lot of games last year,'' Tallon said. “We're definitely in a better position than we were when we started in Chicago. There are some good assets here, some good young players here.

"We obviously have a few holes to fill to get to the next level. We just need to add the right people to create the right chemistry. You can't win without that. But we have a tremendous opportunity coming up with the draft. We're excited about that.''