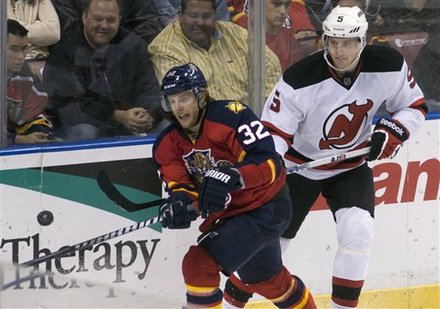 When the Panthers traded for Kris Versteeg last July, it marked the winger's fourth team in three seasons.

It appears Versteeg's nomadic ways are behind him.

The Panthers avoided going to arbitration with Versteeg on Monday by signing him to a four-year deal worth $4.4 million per season.

Versteeg said the deal was done on Saturday night, thus canceling Versteeg's scheduled arbitration hearing in Toronto. That hearing was scheduled for Monday.

“You negotiate right to the bitter end and you see [deals are reached] a lot,'' general manager Dale Tallon said. “We didn't want to go to arbitration and came up with a deal that worked out for both sides. That's how it goes. You try to get the best possible deal and that's what we did.''

Versteeg had been talking about signing a long-term deal with the Panthers since last season, and it was 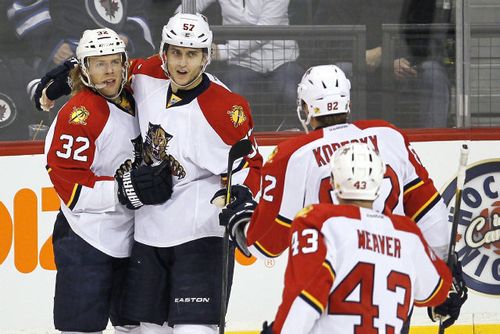 somewhat surprising that he elected to take the Panthers to arbitration in the first place.

Versteeg said he did so only to set a deadline with the Panthers and accelerate talks. Tallon said Versteeg wanting to be a member of the Panthers played a role in how the organization dealt with him.

“He wants to stay here, wants to be with us and see this thing through to a Stanley Cup contender,'' Tallon said. “We want people who want to be Panthers. That's very important to us. He wants to be here for a long time and that's a real positive.''

Had Versteeg and the Panthers gone through with arbitration, he would have received a one-year deal with free agency coming after this coming season.

On Monday, Versteeg said he was prepared for an arbitration hearing but didn't think it would go that far. He was right.

“It's funny how long it took to get done, but there are two sides who want a fair deal,'' Versteeg said. “I think both sides got a fair deal and we're both excited about the future of the franchise. .-.-. We knew a deal would get done, didn’t think we would have to go [to arbitration].

"I was confident we would get something done. Saturday night was the night it officially got done. Sunday I would have flown to Toronto. It all came together perfectly for both sides.''

Tallon originally brought Versteeg to Chicago in 2007 and Versteeg became a regular for the Blackhawks that following season and won the Stanley Cup in 2010. 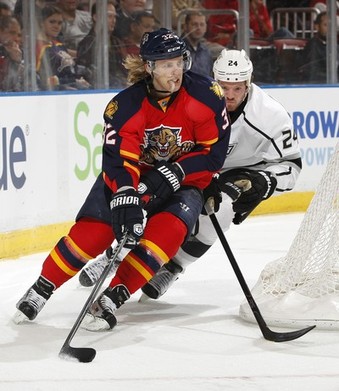 traded to Philadelphia for its playoff run.

The Flyers traded Versteeg to Florida on July 1, 2011 and he didn't disappoint. The 26-year-old right winger had a career-high 23 goals and 53 points as he played in 71 games – most of which came alongside Tomas Fleischmann and Stephen Weiss on Florida's top line.

“He's still a young guy and had a career year last year,'' Tallon said. “His ceiling is quite high. He has the opportunity to get better and grow on and off the ice. I think he has tremendous up side.''

Versteeg played much of the second half of the season battling a hip injury, one that needed surgery soon after the playoffs ended. Versteeg said he had a torn labrum and needed an anti-inflammatory injection before the postseason began.

Versteeg seemed energized once the playoffs started and scored scored three goals with two assists in seven games against the Devils.

Since having surgery in April, Versteeg says he has felt good and will begin skating in the middle of August. Versteeg had sports hernia surgery last summer.

“It is something that's in the back of your mind but you have to play through it,'' Versteeg said. “In the playoffs we tried to shoot it up to help it out and it felt better at the end of the season. During the season it gets on your mind but you don't want to make excuses.''

Versteeg is now the Panthers' second-highest paid forward behind Fleichmann with Weiss eligible to become a free agent after this coming season.

Tallon said informal talks with Weiss' agent have already started and Florida is expected to offer Weiss another long-term deal sometime in the near future. Weiss, a candidate to be Florida's next captain, signed a six-year deal with Florida in 2007.

The Panthers now have all of their regulars for next season under contract save for defenseman Dmitry Kulikov. Tallon said the Panthers were continuing to work with Kulikov and a deal is expected to be reached before the end of the month.

Kulikov, 21, just completed his third NHL season and is a restricted free agent.

“We're trying to get Kulikov signed to some term and we're in the process of working that out,'' Tallon said. “We're in good shape. We're looking forward to a good season.''