As is the case each August, hockey players are slowly making their way south.

With school back in session and the start of the NHL season hopefully not too far away, the ice sheet at the Panthers training facility in Coral Springs is littered with hockey players both young and old -- some members of the Florida Panthers and some not.

All are working their way into shape for the upcoming season as the Panthers plan to open training camp Sept. 23.

Of course, that may not be the case.

The league and its players are in the midst of yet another labor dispute with the collective bargaining agreement expiring on Sept. 15.

Commissioner Gary Bettman has said if a new deal isn't reached by that time, the league will lockout its players for the third time under his watch.

There is some optimism a deal will get done especially after the league's latest proposal. Yet expectations are games will be missed. So what exactly are these players doing working out in August?

Few forget what happened during the last NHL lockout, one that wiped out the entire 2004-05 season. Things were different then, however, as a league that was once in financial disarray reported a record $3 billion in revenue last year.

Both the players and owners feel a deal can be worked out this time around. But both sides, as of today, are still far apart.

The league's first proposal was to cut player revenue from the current 57 percent to around 43 percent. The NHL has moved from that number with its recent offer, one that would come closer to a 50 percent share between the owners and players.

The NHL's recent offer is for six years and it would see an initial drop in the salary cap with annual raises throughout the course of the CBA. The NHLPA could present its counter-offer to the league on Friday. Right now, the salary cap for the upcoming season is just over $70 million. Under the league's latest offer, it would drop to $58 million.

According to capgeek.com, 16 teams would be over the cap if it goes to $58 million. The Panthers have about $54 million committed to next season not including unsigned defenseman Dmitry Kulikov.

The Florida Panthers are scheduled to open the 2012-13 season at home against Tampa Bay on Oct. 13.

"I'm optimistic we're going to get something done,'' Panthers defenseman Ed Jovanovski said. "You see a business side in every sport. Everyone wants a fair deal. As players, we're more than willing to make things fair. But there are 700 people in our union and everything has to be agreed upon. I just hope we don't miss any hockey.''

The Panthers, noting the uncertainty surrounding the issue, has already cancelled their rookie tournament scheduled for Sept. 15. The Lightning, Bruins and Hurricanes planned to take part. Florida will not cancel any preseason games until Sept. 15 passes.

"The last time around, I was 27 so I dealt with it as 'oh, I have a lot more years left','' Panthers goalie Jose Theodore said. "We had a good thing going last year and we really want to get back at it. I'm preparing as if nothing is going to happen, but you have it in the back of your mind. You worry this thing might drag out.''

Jovanovski was joined at the Panthers center on Tuesday by teammates Theodore, Peter Mueller and Tomas Kopecky. The players are using the ice at their facility as well as the locker room and everything else the Panthers have to offer including staff support. But if Sept. 15 comes without a deal, the players will be on their own.

Former teammates Marco Sturm and Radek Dvorak were also on the ice as they get ready for a season of uncertainty for more reasons than one.

Sturm, who played for the Panthers last season, and Dvorak are both free agents. Neither is expected to sign with anyone until a new CBA is agreed upon.

For the most part, teams have shut down as they wait and see what happens next.

And players will be heading south with more frequency as the scheduled opening of training camp comes closer. NHL players around the league are working their bodies as if there will be a camp in September -- even if their head tells them otherwise.

"I talked to [player rep] Mike Weaver the other day and he told me we're working toward getting something done,'' Jovanovski said. "The frustrating part is having a date in mind, a date to gear up for as we try to build off what we did here last year. We don't want to miss any time and I hope we don't.'' 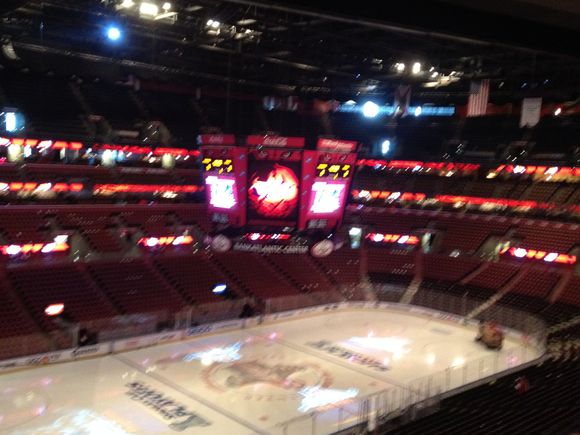