Here are some news and notes from Saturday's morning skate:

First, Kris Versteeg, Mike Weaver and Dmitry Kulikov are out of the lineup.

Versteeg is believed to have pulled something during Friday's practice at the arena. He came out for the skate and left. Mike Santorelli, on the waiver wire yesterday, skates on the top line with Tomas Fleischmann and Stephen Weiss.

Weaver (concussion symptoms) skated throughout the session but won't go.

Kulikov seems to be suffering from a severe case of jet lag after flying from Russia to the New York area on Thursday. He took an early flight to Miami yesterday and spent the day in medical testing. He's signed and cleared but says he isn't ready to play.

Kevin Dineen seemed a little perturbed with the situation.

"You have to look at a guy, whether he helps you,'' Dineen said. "Frankly it's disappointing he's not ready to play. There are different ways around it, but he's not playing tonight. He's a guy who's had some time and should be ready to go. He signed a contract yesterday, fortunately passed his physical. He'll play Monday.''

Caruso's dad is flying in from Toronto for the game and Michael couldn't be more thrilled. Caruso's sister, her fiancé as well as a number of his buddies are also headed to South Florida to celebrate this milestone game.

"I was drafted back in '06, played two more years of junior then went to the AHL,'' Caruso said. "It's been a long time coming, a lot of hard work and a lot of time thinking about this moment. I'm just going to try and take it all in.''

-- The second picture is apparently of a '7th Man' banner the team will unfurl before tonight's game.

Not adding any more to that. 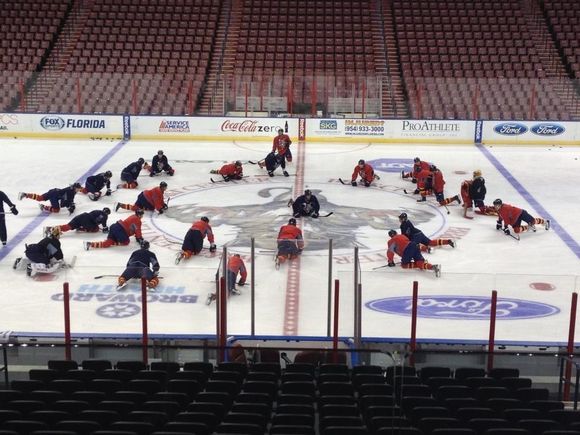