The plan has been for Jacob Markstrom to be the Panthers' goalie into the future ever since the day he was drafted in 2008.

The timetable may have been sped up.

The struggling Panthers, looking for any sort of spark, recalled the 23-year-old Swedish netminder from their AHL affiliate in San Antonio on Wednesday.

Markstrom, 16-15-2 in 33 minor league games, will be given the chance to play right away said general manager Dale Tallon.

With the highly-touted Markstrom now with the team, the Panthers have a full-blown goalie controversy going. Of course, with zero wins in their past five games, that's probably the least of the Panthers worries right now. Tallon said Florida's biggest concern is "stemming the tide.''

"I’m not happy. It's a critical part of the season and every game’s important,'' Tallon said. "We need to cut our goals against down. It's time. He’s played great down there and it’s time to see what he can do. I’m not going to sit still and allow this to continue.

"We need him to come up and play like he’s capable of playing and I’m very confident that he can do that. .-.-. The competition will maybe force some guys to pick up their games a little bit. That’s what it’s all about here. What’s best for the team. I’m not concerned about the individuals here.''

Coach Kevin Dineen said Markstrom will likely start one of Florida's next two games -- either Thursday in Philadelphia or Friday in Pittsburgh. Expect starter Jose Theodore to get the other start.

Although Theodore has played well at times, he has been streaky and his goals-against average is up from last year.

"If you look at most of the games this year, it's a team thing," Theodore said. "Goaltending needs to better, that's no secret. But it's no matter if you lose 1-0 or 6-5, everyone needs to be better in that situation.''

Although Theodore is still looked at as Florida's starting goaltender, the promotion of Markstrom will likely cut into whatever playing time Clemmensen would have gotten.

In back-to-back situations -- as is the case this week in Pennsylvania -- Clemmensen usually would get one of the starts.

"It doesn't change how I'm going to approach things,'' Clemmensen said. "I'm going to come here, put on my gear and go to work. If they tell me I'm playing, I'll do everything I can to win the game. It's pretty simple.

"This isn't my decision. As a goalie, any player, wants to play all the time. Thaty doesn't change if there are three goalies here or 10. You only control what you can.''

Markstrom was at Florida's practice Wednesday morning in Coral Springs and was the second player to take the ice.

And although he is projected to be Florida's future in net, how long will Markstrom be here?

"I think Drew Shore came here with a suit and a pair of jeans,'' Dineen said. "He was a short-term fill and when he came to play it was to come in and get the NHL experience. .-.-. That’s changed. Drew’s worked himself into a situation where he’s a guy we rely on in a lot of different situations, and nothing is given. Everything is earned. Jacob will be handled the same way."

Although he doesn't currently have his own locker stall at the Iceplex -- he used a pair of plastic chairs set up steps from Theodore and Clemmensen -- Markstrom is getting his chance.

Markstrom filled in for Clemmensen at the start of the 2011-12 season and more than held his own, his highlight being a 40-save victory at Montreal that Tallon called "brilliant. He has that capability."

Markstrom was also called up later in the season when Theodore injured his knee and came up in the playoffs when Theodore had a setback.

In seven games last season with the Panthers, Markstrom went 2-4-1 with 17 goals against.

"Every time I come to Florida, I look at it as an opportunity,'' said Markstrom, who has stopped 92 percent of his shots and recorded three shutouts at San Antonio.

"I just love coming here, everything about it. We have a great team here. Hopefully I get to be a part of it.''

"There’s no quick or easy fix here. We’re taking our time,'' Tallon said. "It’s hard to be patient when you realize you’ve got to win some games, but you have to be because I’m not mortgaging the future just to get a Band-aid.''

-- Tallon said the Panthers didn't need to make a roster move to bring Markstrom up and said injured winger Kris Versteeg wouldn't be put on the injured list.

Versteeg skated before Wednesday's practice but wasn't on the team plane to Philadelphia. Tallon said he was better off working out in Coral Springs.

THURSDAY: PANTHERS AT FLYERS
When, Where: 7 p.m.; Wells Fargo Center, Philadelphia
TV/Radio: FSNF; WQAM-560
The series: Philadelphia leads 44-28-7
The game: The Panthers have gone winless in their past five games (0-2-3) with their previous win coming in Philadelphia on Feb. 7. Florida rallied from a 2-1 deficit thanks to a third-period goal from Stephen Weiss and went 2-0 in the shootout to win 3-2. The Flyers, fresh off a rout of the Islanders on Monday, played in Pittsburgh on Wednesday.

PHOTOS COURTESY OF KELSEY HINDS/Special to On Frozen Pond 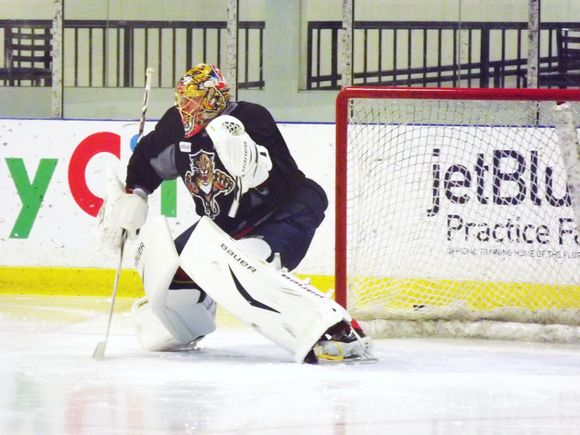 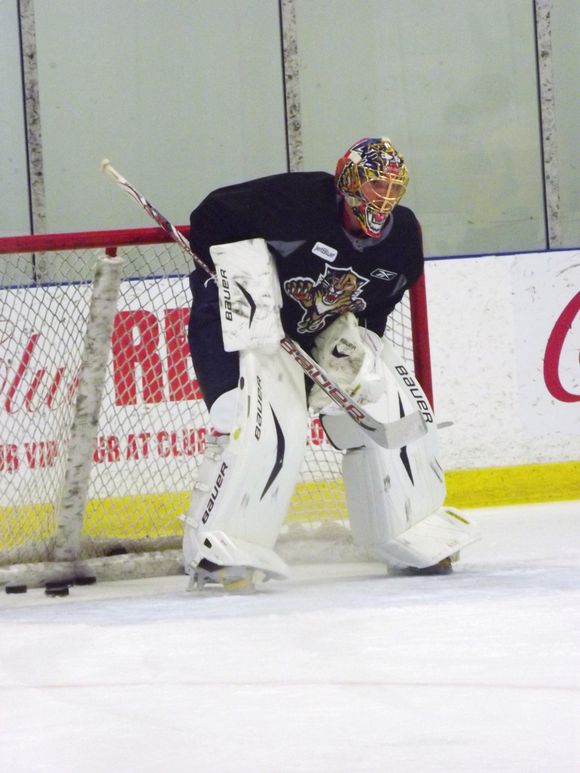