PANTHERS GET THEIR SCOREBOARD: County Tourism Taxes to Pay for New HD Scoreboard for 20th Season

Florida Panthers president Michael Yormark looked as if he had been called into the Principal's office for good portions of Tuesday's meeting with the Broward County Commission.

After being dressed down and forced to apologize for the team's incomplete financial records, Yormark walked out of the Broward Government Center with a $4.2 million grant for a new scoreboard at the county-owned BB&T Center.

The motion to give the Panthers the money from the Tourist Development Tax's reserves passed by a 6-2 vote.

Sue Gunzbuger and Tim Ryan voted against and Stacy Ritter abstained as her husband Russ Klenet has lobbied for the team in Tallahassee.

"This was bigger than a scoreboard. It's about tourism and economic development,'' Yormark said outside the commission chambers.

"It's about creating more visibility for Broward County. We had a very strong case. We have developed a strong partnership with Broward County. .-.-. I thought we were going to get a fair shot. And we did.''

The day wasn't a lopsided victory for the Panthers, but it was close.

County auditor Evan Lukic spoke before the Panthers made their presentation for a new scoreboard and master control center to replace equipment the building opened with in 1998.

Lukic's report spelled out a number of financial discrepancies between the three companies which comprise the Panthers organization: The Arena Operating Company, Sunrise Sports & Entertainment and the Florida Panthers hockey club.

Lukic contends the AOC overpaid the Panthers by $4.2 million on arena returns yet underfunded its reserve accounts.

Yormark promised the situation would be taken care of by August 31 telling the board to "hold me accountable.''

"You've given us your word,'' commissioner Lori Wexler said, "and we've heard that before."

Yormark and the Panthers aren't arguing Lukic's finding but say it's simply an "internal accounting issue" which doesn't affect how the Panthers pay the county or does business. "We've been a wonderful partner with the county,'' Yormark added.

Lukic said without proper documentation from the Panthers, the county doesn't know how much money it should receive from the team.

The Panthers and the county have a complex profit sharing agreement in which Broward County basically gets 20 percent of every dollar over the first $12 million the team clears.

Ryan proposed lowering the threshold to $9 million although that was voted down by the same 6-2 tally the scoreboard was approved by.

"We work extraordinarily hard to drive the maximum profitability out of that building,'' Yormark said. "Our hope there is more distribution. Last year there was a small one. We're going to continue to grow our revenue.''

Although Lukic spoke out against the county paying for the scoreboard -- something he said the Panthers should pay for since the county wouldn't benefit from the purchase -- the commission didn't agree.

A big turning point toward the Panthers getting the money came when Nikki Grossman, CEO of the Greater Fort Lauderdale Convention and Visitors Bureau, told the commission a large Jehovah's Witness international convention wouldn't come to South Florida without updated audio and video capabilities at the arena.

Although Wexler and others scoffed at the $96 million in economic impact the Panthers and Grossman claim the convention will bring, they mostly agreed the impact would be big enough to move forward.

The convention is expected to be held over four weekends next summer with potential return in 2015 and '16. The commission was told the event will bring 12,000 hotel nights to the county next June.

David Zimmerman, general counsel for the NHL, told the commission the NHL would bring its draft weekend to Sunrise within the next three years and promised South Florida was back in the rotation for future All-Star Weekends.

"This is the first time in which the status of their scoreboard crept into my vision,'' Grossman said afterward. "If we could have fit the Jehovah's Witness convention into the convention center, we wouldn't be here. They needed the larger venue and needed the scoreboard for their communications with other conventions.''

Yormark said the scoreboard would be ordered immediately and the old one would be dismantled and hopefully donated to a local high school soon.

The new scoreboard, Yormark said, would be in place by the Panthers' first preseason game in mid-September.

"When you look at what we've done to our building over the past decade, this is the final piece,'' Yormark said. "To have this behind us, to open our 20th anniversary season with a new scoreboard is exciting. The experience is going to be enhanced.'' 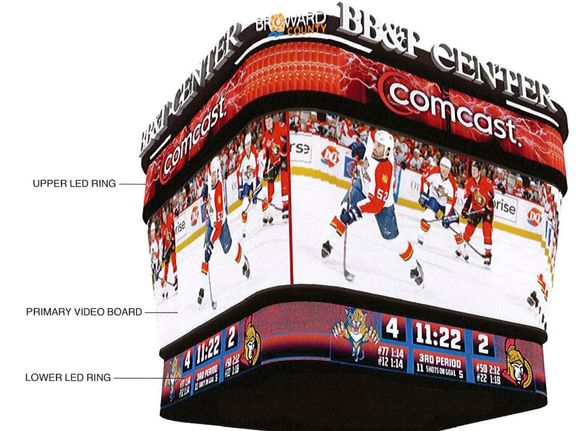