Tim Thomas met the media after his first practice with the Panthers on Tuesday morning and said he was more than ready for a fresh start in South Florida.

The 39-year-old goalie was a hero after leading Boston to its first Stanley Cup in almost 40 years -- yet walked away from the Bruins a year later.

After taking a season off to reconnect with family and get involved in some new business, Thomas was apparently reenergized after watching the playoffs last spring. He said he was "proud" of his former teammates for advancing to the Stanley Cup Finals.

"I have a new found appreciation to being able to play the game at this level and being part of a team again,'' said Thomas, who has not played in an NHL game for anyone but the Bruins.

"My time in Boston was great, I was very fortunate to have the personal and team success I did. I had great teammates .-.-. This is a new start. I'm excited about the future.''

Thomas said he began working out in Michigan in July -- not long after Boston lost in the Finals to Chicago -- and accepted Florida's offer of a professional try out (PTO) on Monday.

If Thomas earns a contract with the Panthers (thought to be a foregone conclusion) he hopes to help Florida make a run at the playoffs. Thomas said the Panthers are "on the verge of a turnaround and a big bounce back."

General manager Dale Tallon, Thomas said, "convinced me of a direction the Panthers are headed in. That helped me make my decision easier.''

Thomas was a huge part of the renaissance in Boston. After the team finished last in its division in the two years following the 2004-05 lockout, the Bruins returned to the playoffs in 2008 and haven't missed them since.

"When I first came to Boston, it was a low point for the Bruins,'' said Thomas, who will wear the No. 34 first worn in Florida by popular goalie John Vanbiesbrouck. "I was able to see the rise in the organization and with the team. I think the Florida Panthers are in a similar situation.''

Thomas, coach Kevin Dineen said, will travel with the team to Texas on Wednesday but will not play in either of the two preseason games against the Dallas Stars. Thomas probably won't play against the Lightning in Tampa on Saturday either.

"He came in as advertised,'' Dineen said. "He has a high compete level and works on every shot. Everything I had heard about him I saw today. It was good. But I don't think you step into a lineup after taking the time off Tim has. I'm willing to give him that time. I'm excited. Everything is a process.''

Thomas spoke at length about his departure from Boston, saying he didn't think skipping the Bruins' Stanley Cup celebration at the White House because he didn't agree with the Obama administration was going to draw the attention it did.

There were rumors Thomas had become a distraction to the Bruins. With Tuukka Rask emerging as a star in net, Thomas took his leave with a year remaining on his contract.

"I didn't go out of my way to bring up politics in that situation. I didn't think in good consciousness that I could go to the White House and I had to give a reason,'' Thomas said.

"I didn't want to lie and say I was sick. I thought I gave a pretty succinct and, from my viewpoint, a very honest assessment of the situation. I just tried to leave it at that. We've given it some time to rest. I'm here to play hockey.''

In Florida, Thomas said he and Jacob Markstrom can most definitely coexist saying "I definitely came here to play,'' but said he is not competing against Markstrom.

"I'm competing against myself,'' Thomas said, "and if I play the best that I can, then I'm going to get the results that I want and the playing time that I want. .-.-. We're pulling for each other and only thinking about the best we can be as individuals. .-.-. We're on the same team and we have the same goals."

Markstrom played well in Monday's preseason opener and said he expects to learn a lot with Thomas around. But Markstrom isn't handing the veteran the starting job no matter what his resume says.

"This is the best league in the world and it's not supposed to be easy,'' Markstrom said. "It will be a fun experience. I'm excited. Competition is part of the game. I still want to play most of the games. My goals haven't changed.''

-- Thomas hopes to be in the mix when it comes to being on Team USA at the Sochi games. Team USA and Nashville GM David Polie told SiriusXM Radio on Tuesday that Thomas was eligible for play at the Olympics and will be watched closely. Tallon, perhaps not coincidentally, works with USA hockey as part of the advisory board.

-- Former Edmonton and Minnesota defenseman Tom Gilbert reported to the Panthers on Tuesday morning and was on the ice with the late group after accepting Florida's PTO offer. Gilbert has played in 447 games over parts of seven NHL seasons.

-- Dineen said center Nick Bjugstad (concussion) will not travel with the team on its four-day trip to Texas and Tampa.

PHOTO COURTESY OF KELSEY HINDS/Special to the Miami Herald 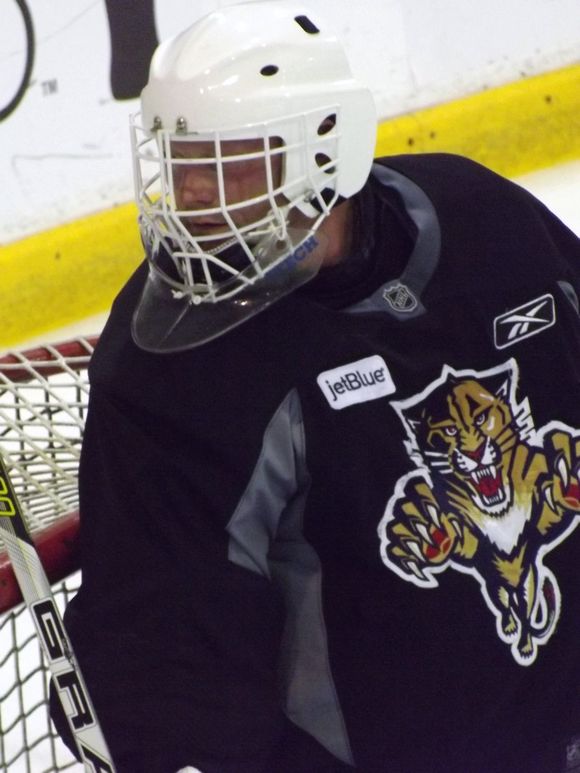