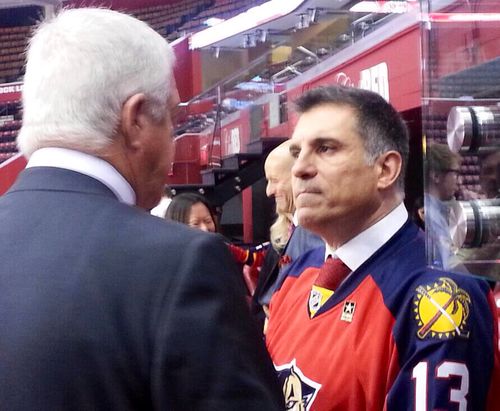 Vincent Viola said he met with the NHL commissioner for lunch a few weeks ago to discuss buying one of Gary Bettman's hockey teams. The Florida Panthers, Bettman said, were a perfect fit.

Viola's pursuit of the Panthers didn't take long as he was introduced as the new owner of the franchise at a press conference at the BB&T Center in Sunrise on Friday morning.

Bettman, who flew in from Los Angeles after his outdoor game press conference at Dodger Stadium on Thursday, said Viola's purchase of the team would put to rest any talk of the Panthers leaving South Florida "forever." 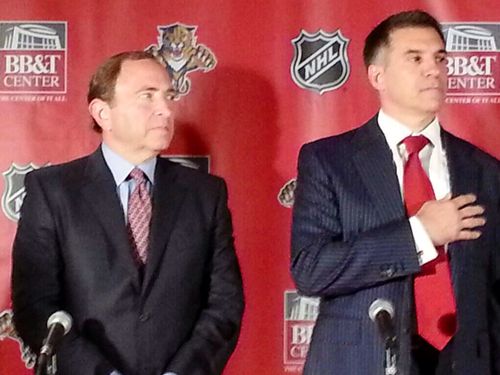 The Panthers have a lease with Broward County through 2028 although the team's struggles on and off the ice over the past decade-plus has led to talk the Panthers could be on the move. That, Bettman said, was never the case.

"The rumor and speculation about the franchise has been overdone,'' Bettman said. "The fact is, Vinnie comes in with an energy and an excitement and a commitment of resources. He wants to take this club to another level.

"This is great news for the fans of the Florida Panthers. People should not be worried about the future of the Panthers being anywhere but here in South Florida. People should be focused on the commitment to winning.''

Viola, 57, is a native of Brooklyn and a graduate of West Point. There was a color guard presenting colors before the introductory press conference with Viola singing the Star-Spangled Banner loudly from the dais. It didn't take Viola long to snap an Army pin onto his new Panthers jersey. 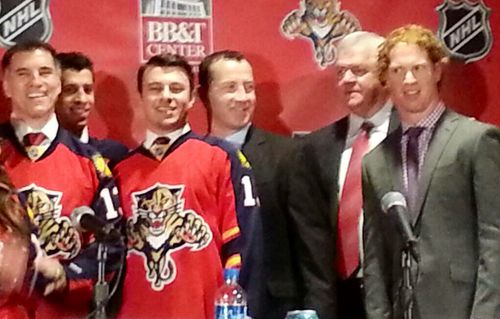 The chairman and CEO of Virtu Financial, Viola said he and his family will soon take up residence in South Florida. He and his family -- which include wife Teresa and sons John, Michael and Travis -- have long vacationed in the area.

Viola's three sons are all hockey fans and will be active within the franchise.

"We are very blessed and understand the stewardship of ownership of a sports franchise,'' Viola said. "We don't really own anything. The players' sweat, sacrificing their health in later years to provide the right feeling for the fans. It's about the players and the fans and our service to those respective groups will determine our success.

"We are firmly committed to South Florida. My wife has commanded we move here, so we are moving here.''

The $230 million pricetag includes everything under the Florida Panthers umbrella including: The NHL team; the operating agreement with the Broward County-owned BB&T Center; the three-sheet Iceplex in Coral Springs; and the rights to develop nine acres surrounding the arena.

Michael Yormark, who was promoted to CEO of the organization, continues to work in trying to land a "destination" casino on the arena land. The team had previously announced a partnership with Boyd Gaming to work on expanding gambling in Florida.

Viola wouldn't go into specifics about the future development of the arena land saying he was going to concentrate on making the hockey team more successful on the ice.

"We're all about hockey and are very singularly focused people,'' Viola said. "That's what we're about, the Florida Panthers. We will do everything we can and we will win here. We're excited about that.''

General manager Dale Tallon and coach Kevin Dineen both spoke of how having Viola willing to spend money on the Panthers made their jobs a little easier. Florida's management team is expected to remain in place at least for now.

Dineen and the rest of his coaching staff are signed through the end of this season.

"It's a great day for us,'' Dineen said. "[Viola] was able to go in and talk to our players and I think he made an immediate impact. It's a real positive. It's a new day and there's a lot of excitement around the franchise.''

The affects of the new ownership has already been felt.

On Thursday, the Panthers signed goalie Tim Thomas to a one-year deal with a base salary of $2.5 million after not spending much money during the summer as the team was up for sale. Florida is also expected to sign Brad Boyes and Tom Gilbert to new contracts in the coming days.

Viola said Friday that he was committed to give the Panthers "the resources needed to win the Stanley Cup.'' That brought a smile to Tallon's face.

"I believe in what he believes in,'' said Tallon, the architect of Chicago's 2010 championship team. 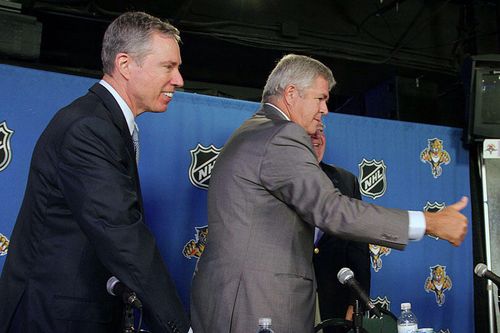 "He's committed to putting a winning team out there on the ice. That's all I can ask for. We're going to get terrific commitment from him and that's exciting. The fact I can go to them and say 'this is what we need, what are your thoughts?' is important. That's the support we need to fix whatever we need fixed.''

The Panthers were controlled by Cliff Viner and a multitude of minor partners including local heavyweights H. Wayne Huizenga, Alan Cohen, Mike Maroone and Jordan Zimmerman. They were all bought out by Viola.

Viola owns a majority of the franchise now, with only longtime business partner Douglas Cifu joining him. Cifu is the new Vice President and alternate governor of the Panthers.

"He has an aura about him,'' said Thomas, who joined a handful of teammates at Friday's press conference. "He breeds confidence. He's a leader and I'm very happy to be coming into the organization as he is. It's awesome. It's one of the things I'm excited about. I'm excited about the whole direction of what's going on around here.' 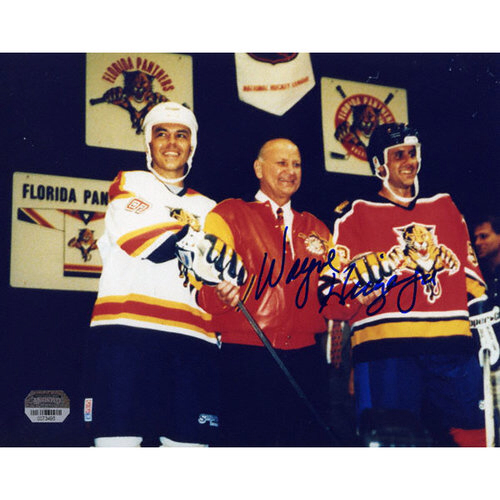 H. Wayne Huizenga was awarded an NHL expansion team on Dec. 10, 1992 for $50 million. The team, which played at Miami Arena from 1993-98, has changed hands a few times with Huizenga holding onto a small piece of the team throughout.

Huizenga, along with the rest of Florida's ownership team, was bought out by Vinnie Viola on Friday.

On June 5, 2001, a group of eight investors -- led by Alan Cohen -- purchases the team from Huizenga's Boca Resorts. Cohen would control the team until 2009 when Cliff Viner and Stu Siegel become co-managing partners of the team.

On July 23, 2010, Viner becomes the sole managing partner of the team -- a role he holds until selling the team to Viola.