SCOTT CLEMMENSEN TO SAN ANTONIO: Length of Stay in Minors Not Known for Panthers Goalie 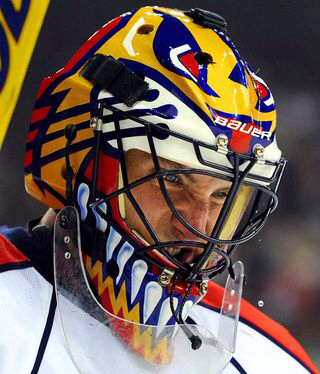 DALLAS -- Scott Clemmensen skated onto the ice with his teammates for Thursday's morning skate but watched most of the workout from the bench.

When Clemmensen rejoins his team is not known.

Clemmensen is currently on the injured list after having minor knee surgery last week. Clemmensen cleared waivers at 11 a.m. local time and coach Kevin Dineen said Clemmensen would stay behind in Texas to get a rehabilitation stint with Florida's AHL affiliate in San Antonio.

Dineen said the plan is for Clemmensen to get not only a few starts with the Rampage but also full practice time, something he hasn't been able to do with two other goalies with the Panthers.

Clemmensen, who began practicing with the Panthers this week, should get his first start since last April on Saturday when the Rampage play host to the Rockford, Ill., Icehogs.

"He's going to get a game this weekend and one next weekend as well,'' Dineen said. "He's also going to get five days of practice and have the net to himself.

"Getting into games is really important for his rehabilitation. He's been fully cleared to play. That's where he's going to start and we'll revaluate the situation. For the short term, he passed through waivers and he's going to get to play some hockey in San Antonio.''

Whether Clemmensen stays in San Antonio after his allotted rehab time will be determined later.

After signing Tim Thomas last week, the Panthers helped their depth at the position but also created a glut with either Clemmensen and Jacob Markstrom needing to go to San Antonio.

Markstrom, 23, is considered Florida's goalie-in-waiting and one of the reason general manager Dale Tallon said he brought Thomas in was to help mentor Markstrom. Markstrom took over the starting role in Florida last season when Jose Theodore was injured in March.

If Clemmensen is sent to the minors, Florida will continue to pay his NHL salary of $1.3 million. Clemmensen hasn't played in the minors since 2009.

"To me this is a good thing,'' Dineen said of Clemmensen going to San Antonio. "It's no fun for Scott to have to go down, but at the end of it, we have stability in goal. You can't have enough of that.

"As of next Monday, our management staff will sit down and talk about what's best for our team. We expect our goaltending to be a strength this year. But this is all talk. Let's play and let things sort themselves out.''

The 25-year-old Viola, whom his dad credited with getting him involved in buying an NHL team, is a graduate of Fordham University and lives in South Florida.