'UNLIMITED POTENTIAL:' Barkov and Huberdeau Give a Glimpse into Florida Panthers Future 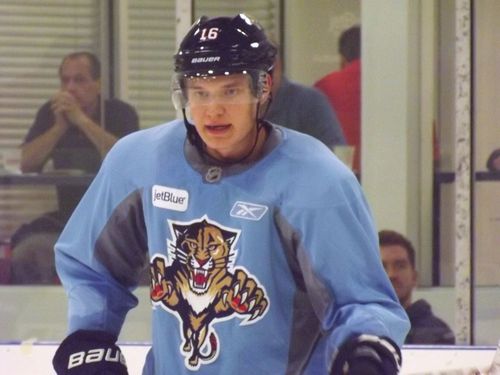 It's not known how long they will stay together, at least initially.

Yet Panthers general manager Dale Tallon sure liked what he saw Tuesday as Aleksander Barkov worked at center, feeding pucks to Jonathan Huberdeau on the wing.

The thought of having exactly that combo not only this season but for years to come is something Tallon envisioned when he took Barkov with the second overall at the NHL draft last June. Huberdeau was the third overall pick in 2010. Neither can legally purchase alcohol in the state of Florida.

"It's exciting to see that,'' said Tallon, the Panthers' general manager. "Lets give it a shot. Why not? They are the cornerstones of our franchise moving down the road. It would be nice if they could hit it off and I think they will. We're going to see them for a long time.''

Regardless of who he plays with, Barkov will make his NHL debut on Thursday in Dallas less than three months after the Panthers selected him in the draft.

"I'm not nervous but I am very excited. This will be the best day in my life,'' Barkov said. "I've always dreamed about playing in the NHL and now it's coming true.''

The Panthers are expecting Huberdeau and Barkov to create some offense either together -- as they may be in Thursday's opener -- or apart.

Barkov centered Brad Boyes (who remained his right winger this week in practice) and Kris Versteeg in Saturday's preseason finale.

"We're continuing to get a feel for how guys are rolling,'' coach Kevin Dineen said.

"To me, Jon has already proved his potential to be a top-tier player in this league. [Barkov] has that potential. But right now, that's a little premature.''

Barkov and Huberdeau playing together seems like a natural fit.

Huberdeau was the third selection in the 2011 draft and stayed behind and played junior hockey that following season. Huberdeau was with the Panthers for the entirety of the lockout-shortened 2013 season, scoring 14 goals and winning the league's rookie of the year award in the process.

Huberdeau, 20, played with a hip condition that required surgery in the offseason, time off Huberdeau used to strengthen his upper body by adding 10 pounds of muscle.

Now healthy, Huberdeau expects to continue being one of Florida's most counted on offensive threats.

"I'm feeling really good but I need to take care of this every day,'' Huberdeau said of the injury. "I'm 100 percent and ready to go Thursday. I know I have some pressure there but it's not coming from me. There wasn't much expectation for me last year, I just wanted to help out. I'm going to do the same thing I did last year.''

Barkov says he feels no pressure to try and follow up Huberdeau's season and win the Panthers a second Calder Trophy.

After spending the past two seasons playing professionally in Finland, the 18-year-old Barkov has struggled in adjusting to the smaller ice surface as well as the biggest and faster players in the NHL.

That, however, is something the Panthers planned on. There is no panic as the organization is fine with the progress Barkov is making as they expect things to come to him sooner rather than later.

There is little question Barkov is an exceptional talent and the Panthers have been impressed with not only his skill, but with his aptitude for the game as well as his work ethic.

"I am playing with some skilled players right now and I have to play well to be able to keep doing that,'' Barkov said. "Jonathan has more experience at this level and I like playing with him. We'll see how it goes. I just want to play how I know how to play.''

Said Dineen: "I think he has unlimited potential."