« PANTHERS WIN THRILLER IN DALLAS: Thomas Strong as Cats Top Stars 4-2 | Main | BLOCKAGE: Erik Gudbranson and Panthers Get Down and Dirty to Beat Stars in Opener » 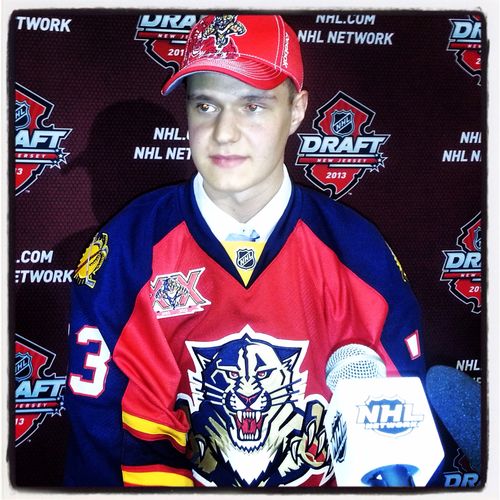 ST. LOUIS -- The Panthers made a little NHL history on Thursday night when rookie center Aleksander Barkov became the youngest player to score in almost 70 years.

Barkov was the second overall pick of the Panthers in the 2013 NHL draft and made his debut on Thursday. Barkov's goal was big at the time as it came with 9:28 left in the third period and tied the score at 2.

Ted Kennedy was four days younger than Barkov when he scored a goal for the Maple Leafs on Jan. 8, 1944. Barkov was 18 years (and 31 days) old at the time of his goal.

"Isn't that a great stat? That's something to be incredibly proud of,'' coach Kevin Dineen said. "There are a lot of stats out there, but that's a pretty neat one. He didn't look out of place. He went out there and established himself and played his best game in a Panthers uniform.''

Barkov has spent the past two years playing professionally in Finland and said he didn't feel any nerves in playing in his first NHL game. "I was just excited,'' Barkov said. "I had a lot of fun.''

As is custom, the Panthers collected the puck he scored his first goal on and will have it -- along with the lineup from his first game -- framed.

Barkov's goal came on his third shot of the night; last season, Jonathan Huberdeau scored a goal on his first shot in his first NHL game. Barkov is the eighth-youngest player in NHL history to score his first NHL goal according to research from Elias Sports Bureau.

Other Florida players to score in their first game include Stephen Weiss and Shawn Matthias.

"I'm not thinking about that, I'm just trying to concentrate on the next game,'' said Barkov, who played 15:34 off 21 shifts in his opener. "I was just trying to put the puck on the net. Sometimes it goes through.''