« VERSTEEG TRADED: Winger Back to Champion Blackhawks | Main | VERSTEEG SPEAKS: Happy to Be Back in Chicago » 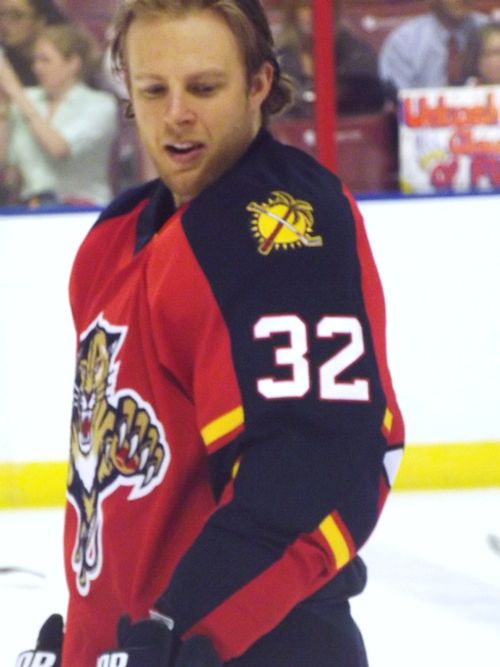 In case you all missed it: Florida sent Kris Versteeg back to Chicago for youngsters Jimmy Hayes and defenseman Dylan Olsen.

Hayes will wear No. 12 and is expected to be in the lineup tonight against the Wild. Olsen will start with AHL San Antonio. Hayes, who arrived in Minneapolis before Friday's morning skate from Grand Rapids, Mich., was on a line with Shawn Matthias and Sean Bergenheim/Krys Barch.

"We know there are going to be moves as the team moves forward in getting better in a lot of areas,'' coach Peter Horachek said after the skate. "When the team isn't performing well, changes will be made. We needed a change. We're ready to move forward in what is best for our team.''

Versteeg, who had a limited no-trade in his contract, left Minneapolis early Friday morning and was on a third line in his return practice with the Blackhakws.

"I'm not happy with the situation our team is in as far as wins and losses,'' Tallon opened. "The effort has been better lately. We're going to continue to be aggressive and make changes that are important for our franchise moving forward keeping our focus on the future.

"We're excited about where we're headed, the foundation being built. We added two young pieces to an already deep foundation of players and prospects. This is a step in the right direction for the Florida Panthers.''

To make the deal, Florida will eat half of Versteeg's contract over the course of the next two-plus seasons. Versteeg's cap hit is $4.4 million and will be split by the two teams.

With so many teams close to the salary cap ceiling, the only way Florida could move Versteeg was to take on some of his money. The Panthers are no where near the cap ceiling.

"In this day and age it's tough - especially midway through or early in a season - to make moves,'' Tallon said. "You have to be aggressive, have to be creative. Now with the new CBA we can take money back. That will help future moves.''

The Panthers signed Versteeg to a four-year deal before the 2012 lockout. Versteeg was limited to 10 games last year because of two injuries -- most notably a major knee injury suffered against the Lightning.

Versteeg had two goals so far this season and was seeing his playing time diminish both under Kevin Dineen and Horachek.

"His play was inconsistent,'' Tallon said. "I think he was trying to do too much, trying to carry the burden of the big contract. He tried to do too much and wasn't consistent enough. This was based on performance only.''

Said Horachek: "It's more than just scoring goals. His play wasn't consistent. He wasn't at the top of his game and hadn't played well all year I don't think. We know what he's done in the past, he's been a good, talented player. The team has to make what it thinks are the best choices.''

Versteeg, meanwhile, is absolutely thrilled to be back in Chicago playing in a city and for a team he loved. Versteeg didn't want to leave the Blackhawks after they won the Stanley Cup in 2010 but was a salary cap victim.

Of course, with Florida picking up half of his salary for this and the following two seasons, he's a little more affordable.

Versteeg went on WGN radio in Chicago this morning and not only said he hoped former Chicago defenseman Brian Campbell would eventually follow him to the Second City, but that other teammates sounded a little jealous in their text messages to him.

Campbell said he never mentioned to Versteeg that he wanted to be in Chicago.

"I'm right where I want to be,'' Campbell said.

As far as waking up went, Versteeg thought the trade might have been a dream. He told reporters in Chicago that he was having dinner in Minneapolis and didn't answer his phone when Tallon initially called. He knew something was up when he checked the phone and saw Tallon called a few times -- and had left a couple of voice mails.

"I didn't really know what was going to happen,'' Versteeg said. "Florida, we were struggling a little bit and you heard that there might be something going on. But obviously when Dale called me last night and told me I was coming back here, obviously put a smile on my face. And I'm very excited about coming back here. .-.-.

"It's still a lot to process. I've had so much good times here and you almost put that all in the rear view mirror because you never thought you'd come back. Now I'm back here and it's now about getting back to playing hockey and trying to put my best foot forward every night to try to help the team in whatever way I can.''

"We added two big kids,'' Tallon said. "We want to big, we want to be strong. We want to be tougher. Those are the things we need to improve on. We added size and diversity to our lineup.''