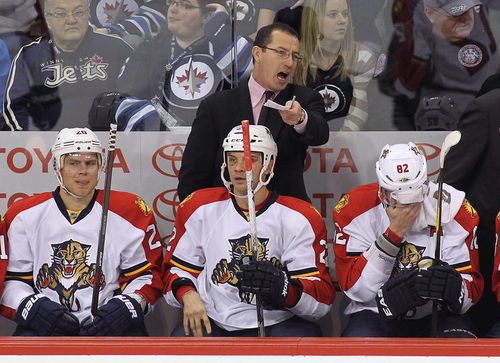 BOSTON -- The Panthers made an early morning move Friday as coach Kevin Dineen was fired along with assistant coaches Gord Murphy and Craig Ramsay.

Dineen was replaced by Peter Horachek, a former Nashville assistant who has been coaching Florida's AHL affiliate in San Antonio. Horachek will be assisted by former Florida center John Madden and former Florida captain Brian Skrudland.

Horachek is on his way to Ottawa and is expected to run this afternoon's practice in advance of his NHL head coaching debut tomorrow afternoon against the Senators.

The Panthers are winless in seven games their longest skid since the end of the 2010-11 season which led to the firing of Pete DeBoer and the hiring of Dineen.

“After 16 games it was clear that our team needed a change in philosophy and direction,” GM Dale Tallon said in a statement.

“We have not met the expectations that we set forth at training camp and it is my responsibility to make the necessary changes to ensure that our club performs at its maximum potential. We thank Kevin, Gord and Craig for their hard work and dedication to our organization and the professionalism that they displayed throughout their tenure.”

“Peter is a bright hockey mind who brings to our club a wealth of coaching knowledge,” said Tallon. “He is a focused, determined and demanding coach who has experienced great success at all levels of competition. Both Brian and John are proven winners who won multiple Stanley Cups and are individuals that our players know very well. With these additions, we are confident that we have a staff that will work tirelessly to bring continued success to our organization.”

Horachek, 53, becomes Florida’s 12th head coach in franchise history after most recently serving as the head coach of Florida’s American Hockey League affiliate, the San Antonio Rampage. Prior to working in San Antonio, Horacheck spent nine seasons with the Nashville Predators (2003-2013), serving his last two years as associate head coach. While working for the Predators, he helped the club advance to the postseason on seven occasions.

Skrudland, 50, has spent the last four years as the team’s director of player development. He served as Florida’s first team captain, appearing in 256 games with the Panthers (1993-97), while guiding the club to the 1996 Eastern Conference Championship and the Stanley Cup Finals.

After his retirement from playing at the age of 36, the Peace River, Alberta, native returned to the Flames organization as an assistant coach for three seasons (2000-2003).