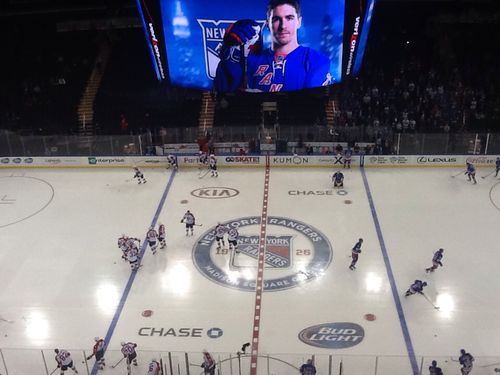 NEW YORK -- The Panthers haven't played too many complete games as they did Sunday night against the Rangers at Madison Square Garden.

Yet all it took was a few mistakes early in the third for the Rangers to take a 4-3 win and extend Florida's losing streak to nine.

The Panthers, 0-5-4 since Oct. 19, got a Brian Campbell goal with seven minutes left and made a real run at the Rangers and Henrik Lundqvist but it just wasn't enough.

"You're not going to win games when you turn the puck over,'' said coach Peter Horachek, who is 0-2 since taking over for the fired Kevin Dineen on Friday.

Dmitry Kulikov was at the center of New York's third period goals.

Kulikov's weak pass toward Erik Gudbranson deep in the Florida zone was picked off by Carl Hagelin and flipped to Brad Richards. Richards teed off on a wristshot that beat Tim Thomas (25 saves) for a 3-2 lead 46 seconds into the third.

Later in the period, Kulikov was called for holding Ryan Callahan with teammate Kris Versteeg already in the box. Florida was down two skaters and the Rangers cashed in with Mats Zuccarello scoring from the right circle.

Thomas spun and went into the baseball swing, smashing his stick up against the cage. Thomas said his frustration didn't have to do with his fairly new teammates but with himself.

Thomas also took out his frustrations by punching New York's J.T. Miller in the face when Miller encroached on Thomas' personal space early in the third. Both Thomas and Miller got penalized for that interaction.

"I was frustrated because I wanted to help us win, turn that corner,'' said Thomas, making his second start in as many days after missing a few weeks with a lower body injury.

"No matter what came my way, I wanted to be the difference in breaking out of this.''

Florida snapped New York's run of giving up two goals or fewer at nine games after Campbell scored his second of the night (and season) when he hustled to chase down a loose puck in the slot and beat Henrik Lundqvist.

Campbell gave Florida its first lead at 2-1 in the second when his long shot from inside the blue line found its way.

Florida trailed 1-0 after Miller scored off a deft passing display at 9:49 of the first with Florida tying it in the final seconds of the period. Rookie Aleksander Barkov, 18, followed up a hard shot from Kris Versteeg to get his fourth of the year.

The Rangers then scored the next three goals to take a lead they would never relinquish. Florida battled hard in the final minutes after Scottie Upshall was knocked backward into the Florida bench on a cheap hit from Chris Kreider.

Florida pulled Thomas and had a 6-on-4 advantage deep in the New York zone yet couldn't find the equalizer.

"We felt we had the momentum, felt we had a chance to tie it up,'' Horachek said. "Teams get on their heels, the puck is bouncing on the bad ice. We wanted to get as much traffic up there as we could.''

The Panthers solved their goalie glut by sending Jacob Markstrom to Florida's AHL affiliate in San Antonio. Markstrom has played 55 games over the past two seasons with the Rampage but none since being recalled last March.

"He has to play and he'll go down there and do that,'' GM Dale Tallon said. "He needs to get some confidence.''

-- Center Scott Gomez has missed three of the past four games after suffering a groin injury.