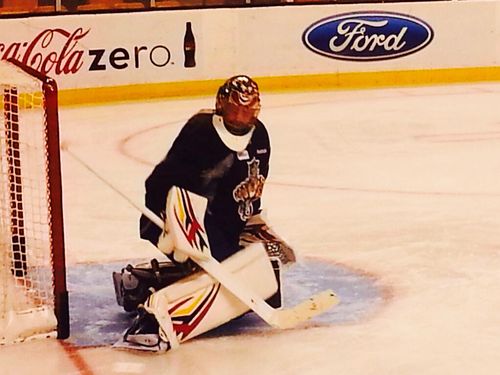 (Tim Thomas of the Florida Panthers works out at Thursday's morning skate at the Boston Garden. It was Thomas' first workout on Boston ice since the 2012 postseason. Photo/George Richards)

BOSTON -- The highlight of Thursday night's 4-1 loss to the host Bruins for Florida had nothing to do with the game on the ice.

It was seeing the Bruins celebrate Panthers' goalie Tim Thomas on the HD boards at center ice.

Thomas, 39, watched most of the game from downstairs and word was the Bruins were going to forget about the video tribute if they couldn't see Thomas' reaction.

In the third period, Thomas crept into the top-level press deck and kept a low profile.

The Bruins' television cameras caught him as he smiled while watching the highlight tape. As the crowd at the Garden took to their feet in applause, Thomas stood up and waved.

Thomas was extremely happy to be remembered this way after leading the Bruins to their first Stanley Cup in almost 40 years in 2011. Some predicited there would be mixed reaction for the way Thomas left the Bruins in 2012.

"It was great to be back at the Garden, great to be back in Boston,'' Thomas told the Miami Herald as he headed to the elevator late in the game. Thomas seemingly declined all other official interview requests both before, during and after the game.

"I was hoping for that kind of reaction from the fans. I loved playing here. I loved Boston. It was nice to see that response.''

Thomas is expected to return Saturday at Ottawa with GM Dale Tallon saying he would likely make a decision on which goalie -- Scott Clemmensen or Jacob Markstrom -- returns to San Antonio on Saturday night after the Senators game.

On Thursday night, Thomas said his goal was to play in that night's game but his lower body injury kept him from doing so.

"I was aiming for this game, wanted to play,'' said Thomas, who has been skating since last week.

"The reason we're being so cautious is so when I come back, I'm back for good. I want to help this team out."

Thomas was one of three Florida goalies on the ice for Thursday's morning skate. There was only one a large throng of media gave a flip about.

Members of the local media took up residence on the empty Bruins bench snapping pictures of Thomas working on the Garden ice for the first time since April 25, 2012 -- a Game 7 loss to Washington in the opening round of the Eastern Conference playoffs.

The Panthers, and perhaps Thomas, have two more trips scheduled to Boston on Jan. 28 and March 4.

"I don't want Tim for one game, I want him for a major bulkload,'' coach Kevin Dineen said postgame.

"That's what he was brought here for. When he gets in the mix I want him for the long run. I want him to be in that locker room, want him in that mix.''