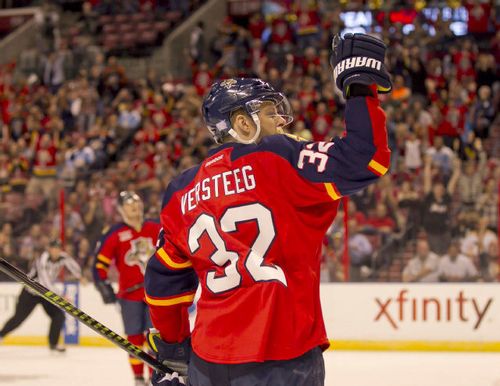 One player on the Panthers who knows a little something about scoring may not play Tuesday.

Kris Versteeg, a healthy scratch Saturday for what he said was the first time, was the odd-man out on a line with Marcel Goc, Tomas Kopecky and Shawn Matthias in Monday's practice.

Dineen is said to be unhappy with Versteeg's effort and all-around play although Versteeg said after Monday's practice that the two haven't spoken about the situation.

"I have to earn my time back,'' Versteeg said Monday. "It's not easy but you keep working. You get paid a lot of money to play a game you love, so you roll with the good times and deal with the bad times and try to always come out on top, do the best with the opportunity you're given. I'm fine. I know what's expected of myself.''

Vertseeg said Saturday that he did struggle getting comfortable early in the season after coming back from major reconstructive knee surgery. Yet Versteeg says he's been feeling good lately and felt he's been playing hard.

Dineen wouldn't say Versteeg is in or out of the lineup on Tuesday although not having his own line in practice seems to suggest he may not be.


"It's not easy for anyone to be in that situation,'' Dineen said. "We make lineup decisions on what we think is the best way to compete against Edmonton.''

-- Goalie Tim Thomas didn't practice with the team Monday although Dineen said he worked out earlier that day and over the weekend.

Thomas is out for Tuesday's game, although Dineen said he would be making Florida's upcoming road trip.

Florida visits Boston, where Thomas led the Bruins to their first Stanley Cup in four decades, on Thursday.