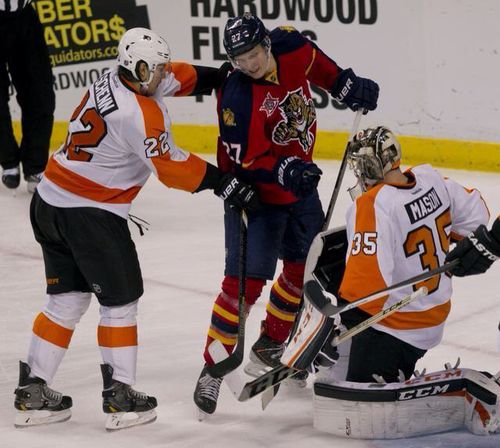 It doesn't appear that center Nick Bjugstad is going anywhere yet coach Peter Horachek hasn't told him to find a permanent living arraignment. Bjugstad is still living at the 'vacation village' where the Panthers often house players temporarily.

Bjugstad was thought to start the season in the minors but after missing all of training camp and the first six games with a concussion, started the season with the Panthers on Oct. 15.

Bjugstad, 21, has five goals and 12 points in 26 games this season. His goal off of Detroit's Pavel Datsyuk and Jimmy Howard on Tuesday was one of the Panthers' nicest goals of the year.

"I would say he's pretty secure right now, but no one is totally ever secure,'' Horachek said. "Even if you tell a guy to get a place, that doesn't guarantee anything. But he's doing a pretty good job.''