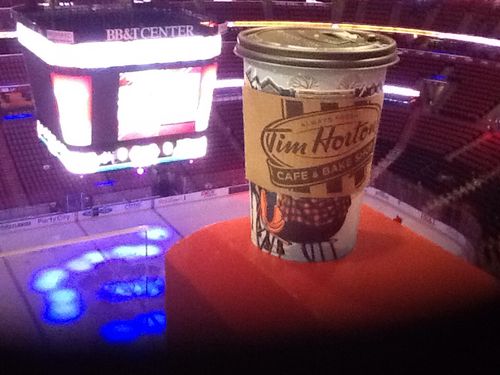 With goalie Tim Thomas out with injury, the Panthers needed a big-time performance from Scott Clemmensen to beat the high-flying Capitals.

Clemmensen stopped the final six shots faced in a marathon shootout round to lift Florida to a 3-2 win over Washington at BB&T Center.

Washington, which beat Florida by the identical score last month, scored on three of its first four shootout attempts but didn't score after that.

Tomas Kopecky's goal off third-string goalie Phillip Grubauer in the tenth round gave the Panthers a rare win over the Capitals. Washington had won 10 of 11 against Florida. The Panthers, with back-to-back shootout wins, have won four of the past five.

Friday's game was tied for the second-longest shootout in franchise history.

"It's a gimmicky thing but I'm a hypocrite because when I'm at home, I love watching it,'' said Clemmensen, who gave up goals on all three of Washington's shots in Florida's shootout loss on Nov. 2.

The Panthers could have Thomas back Sunday, but may be without defenseman Erik Gudbranson if he's suspended after receiving a match penalty for his high elbow on Eric Fehr in the second. Fehr hit the deck after Gudbranson launched into him; Gudbranson got five minutes for his subsequent fight with Troy Brouwer and ejected for aiming for Fehr's head.

General manager Dale Tallon and coach Peter Horachek said they didn't think Gudbranson lead with his elbow. Tallon says he will speak with the NHL's Brendan Shanahan about getting the match penalty rescinded.

Since Gudbranson was slapped with a match penalty on April 11 for a hit on Bryan Little, he could be suspended for Friday's hit. If Shanahan pulls back the match designation, Gudbranson may be able to play.

"There's no elbow, it's to his side and [Fehr] got hit in the chest first,'' Horachek said. "We'll leave it to [the NHL] to look at it. .-.-. Right now all our guys are playing well. You don't want to change anything, don't want to lose anyone especially under those circumstances.''

With Gudbranson out, Florida not only played without one of its top defenseman but had an extended penalty kill.

Both Washington and Florida scored on a four-on-four chance but the Capitals picked up their second goal during the three minute power play left on Gudbranson's fighting major.

It looked like it could be a long night for the Panthers after the Capitals put a puck past Clemmensen 41 seconds into the game.

Only Washington's Martin Erat came through the crease and made contact with Clemmensen; the goal was dismissed.

Florida scored first with Dylan Olsen continuing his hot streak by picking up his third goal and sixth point in the past five games.

The two teams scored alternating goals in the second and were tied at 2 going into the third.

Aleksander Barkov gave Florida the lead back after picking off a clear attempt in the Florida zone and whipping a shot past Grubauer with 20 seconds left in the 4-on-4.

With 30 seconds left in the period, Clemmensen lost sight of a loose puck hanging dangerously behind him. Defenseman Mike Weaver tried to clear it, but the puck drifted over the line before being knocked away.

At the next stop in play - with 6.6 seconds left - officials waited for word from Toronto. The right call was made and Ward was given his goal. The game went back in time as 29 seconds were put back on the clock.

With Thomas out, Florida brought up Jacob Markstrom on an emergency goalie call-up. That allowed the Panthers a little flexibility and didn't require putting Thomas on the injured list for a week.

Horachek said Thomas' probable groin injury shouldn't keep him out of the lineup for much longer. Thomas could practice Saturday morning and Horachek said he'll be on the charter flight to Canada.

"It's not long-term,'' Horachek said. "With him and in needing him, we're just being overly cautious.''