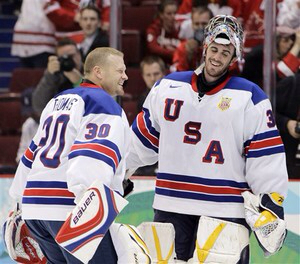 Although his new team is likely going nowhere this season, Panthers goalie Tim Thomas has aspirations to return to the Olympics and represent his country in Russia.

Thomas, who saw limited action for Team USA in 2010 at the Vancouver games, is one of six goalies under consideration to make the team.

"That was an experience of a lifetime and I wouldn't mind doing it again,'' said Thomas, a native of Flint, Mich. "It's an incredible feeling.''

According to a recent story in the New York Times, Team USA general manager David Poile -- who serves in the same capacity for the Nashville Predators -- said Thomas is on the short list for one of three roster spots.

Of the six, Quick is currently out with a groin injury but led the Kings to the Cup in 2012 and should be healthy by the time Poile releases the final roster at the Winter Classic in Michigan on New Year's Day. Miller, Team USA's starter in 2010, is expected to return.

Ottawa's Craig Anderson, who played for the Panthers and resides in South Florida, could still be considered although he told the Ottawa Sun "you've got to go out and play and not worry about whether you get picked or not" when told he wasn't on the current list.

"My first thought was that's all the American goalies in the NHL,'' Thomas said with a smile when asked about Poile's list. "It's too early to mean much, but it's nice to be on a list somewhere. I would like to raise my game even more, but I'm always like that.''

Although he hasn't played great in his past two outings -- Florida coach Peter Horachek pulled Thomas from Saturday's 5-1 loss to the Penguins -- Thomas has shown he can still play at a high level after taking last season off.

Florida general manager Dale Tallon, who is part of Poile's council with Team USA, says Thomas showed his strong work ethic with Team USA in 2010. Horachek was an assistant for Poile's Predators for a decade and has started Thomas in 11 consecutive games.

"I don't know what Team USA is thinking or not thinking,'' Horachek said last week. "We're managing him and there's constant conversation on how he's feeling and where his energy level is.''

Unfortunately for Thomas, Pittsburgh's Dan Bylsma is the coach of Team USA and sure didn't see Thomas' best on Saturday. Thomas gave up four goals on 13 shots in two periods of work. Thomas hadn't been pulled since Florida's second game of the season in St. Louis.

"He's been playing every game,'' Tallon said during Florida's loss to the Rangers last week.

"He's getting his confidence back, he's battling every night. He competes like no one else. He's a true competitor. Playing in the Olympics is one of his goals and it's motivating him. It's tough competition but he's up for it.''

Making the U.S. national team isn't going to be easy for Thomas although he certainly has the credentials. Not only was he the Conn Smythe winner when he led the Bruins to the Stanley Cup championship in 2011, but he also is a two-time winner of the Vezina Trophy as the NHL's top goalie and a five-time All-Star.

Yet Thomas would love nothing more than to slip a gold medal around his neck and put his hand across his heart on the podium as the Star-Spangled Banner plays in Sochi.

"I grew up thinking about playing in the Olympics,'' Thomas said, "not in the NHL.''

Former Panthers goalie Tomas Vokoun has been out since September after having surgery to dissolve a blood clot. Vokoun, who helped lead the Penguins into the Eastern Conference finals last spring, has been spending time with his family in South Florida since leaving Pittsburgh.

Vokoun said he hopes to be able to play again yet isn't sure whether he has played his final NHL game. Vokoun had blood clot issues while with Nashville in 2006 before coming to the Panthers in a draft-day trade in 2007.

“This time anything can happen,” said Vokoun, who played with Florida for four seasons. “When you play professional sports it’s not going to be forever. I always choose my health over everything else. Whatever happens I’m kind of preparing for the worst-case scenario and best-case scenario.”