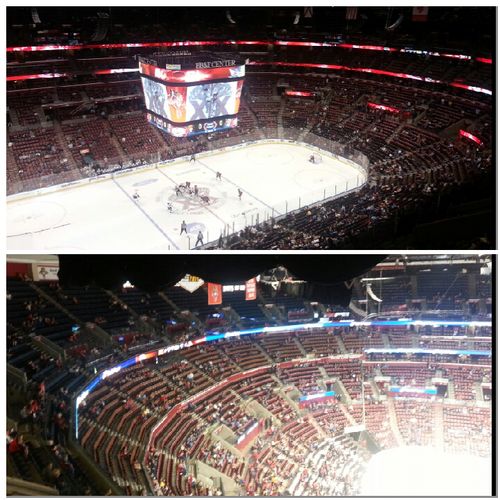 Coming off their first playoff appearance in more than a decade, the Panthers had one of their best attended seasons last year despite a lockout that cost half the home dates.

A last place finish for the first time in franchise history and a complete lack of activity on the free agent market over the summer has cost the Panthers at the gate this season.

Although Florida has gotten a recent push from big draws Detroit, Montreal and the New York Rangers, the Panthers are still near the bottom of the league in average attendance (26th) and capacity percentage (29th).

"Finishing last is always an issue as is getting off to a slow start,'' team president Michael Yormark said.

"Two years ago we went to the playoffs then we were hit with a work stoppage. When we start up, we finish last in the league. We had concerns last summer. The franchise was in transition. We were stagnant last summer.''

With the team up for sale, the Panthers not only didn't make a splash with free agent signings, but also let center Stephen Weiss - the team's all-time leader in games played and face of the franchise - walk away without much of a fight.

The team tried to create excitement in a market that yawned. The Panthers slashed prices on season tickets - some were going as low as $7 per game - with a number of perks to those who signed on.

Swag the Panthers offered season ticket holders include free parking (they now charge $20 per car), a free home jersey and tickets to select concerts (which turned out to include Barry Manilow and comedian Jeff Dunham) and other home games.

Through 21 home dates this season, the Panthers are averaging 2,334 less per game than they announced in 24 home games last year.

Last year was different not only because the team was coming off its first division title in franchise history, but also started playing in the middle of the winter once the lockout ended. October and November are traditionally hard sells not only for the Panthers, but for a good number of NHL and NBA teams.

"Having seven games in October hurt us; it's too much for us,'' Yormark said of Florida's early season struggles. "With the Olympic season, it's not a balanced schedule. We just had too much inventory in October and I think things are going to catch up. We have a lot of big games left.''

Yormark says the Panthers announced attendance is tickets sold and not necessarily fans in the seats. "We've had some no-show issues,'' Yormark said. Currently, Florida is playing to 76 percent of its capacity at the BB&T Center which holds 19,250.

The Panthers have reduced official capacity by putting up tarps in the upper deck for select games. The numbers used in this report reflect the arena's true capacity.

Although attendance figures have picked up at the same time out of state (and Canadian) license plates have infiltrated South Florida roadways, the start of this season was a nightmare for Yormark and his sales staff.

With a decrease in season ticket holders as well as a rough start by the team, demand was lower than usual. Although the Panthers drew an announced 18,584 for their home opener against Pittsburgh on Oct. 11, only 12,810 showed up two days later for a game against 2012 Stanley Cup champion Los Angeles.

During one two-game weekday stretch early last month, barely half of the BB&T Center was filled when Ottawa and Winnipeg came to Sunrise. Photos of swaths of empty seats quickly made their way around the internet.

Florida's announced attendance for Ottawa on Dec. 3 was 10,074 -- lowest since a game against Carolina on Halloween 2007. It has gone up from there in small increments although Florida drew 54,906 (average of 18,302) to its most recent three games.

The Panthers didn't do much to help their own cause as the team went into the Ottawa game with wins in just seven of their first 27 games and had fired their coach a few weeks before.

Craig Custance, NHL writer for ESPN.com and ESPN the Magazine, covered the Atlanta Thrashers when that team played many games in a mostly empty downtown arena. The Thrashers were eventually sold and relocated to Canada, something some fans fear could happen to the Panthers.

"The optics of mass sections of empty seats in Florida aren't great in a time when the league talks of prosperity, successful recovery from the lockout and even rumblings of expansion,'' Custance said.

"Clearly, there's still work to be done in Florida. You certainly can't blame the fans for not showing up. The team wasn't good last year and didn't spend anything in the summer to dramatically upgrade the roster and then struggled to start the season. That's hard to bounce back from.''

There are distinct differences in the Atlanta situation and the Panthers, however.

When the team was sold to Vinnie Viola in September, one of the first things NHL commissioner Gary Bettman said was the stability Viola brought would end talk of the Panthers leaving South Florida for good.

The Panthers have a long-term lease with Broward County, one that allows them to run the building and keep most of whatever profits are raised from it. That helps keep the Panthers here as well.

The Thrashers couldn't find a local owner who would keep the team in town as tenants at Philips Arena to the NBA's Hawks. The Panthers, obviously, control their arena concerns.

"The key here is ownership,'' Custance said. "Florida fans have shown they'll show up if the product is good and that starts at the top with a commitment from Vincent Viola and a demand for something more than seasons that alternate between mediocrity and the basement. The NHL has proven it can work in non-traditional markets with strong ownership and good management. It doesn't stand a chance without it."

With the new ownership, which has promised to spend whatever is necessary to make the Panthers a winner, Yormark is confident fans will return. The team beginning to pull itself out of the cellar is most definitely helping.

Those Florida fans in the building sure seemed to enjoy serenading the large group of Montreal followers who left Sunday's game early. The Panthers won that one 4-1.

"It was great to see the place packed, that makes for a fun night'' Brian Campbell said. "And it was great that our fans got to stand up and be proud at the end of the game. We heard them. They deserved that.''

(*) - Season not yet completed