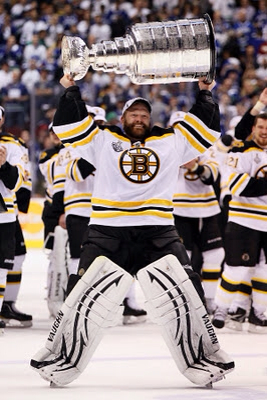 BOSTON -- Bruins fans gave Tim Thomas the reception he deserved in November, giving their former goalie -- who helped the city win its first Stanley Cup in four decades -- a standing ovation when he returned to the Garden for the first time as a visitor.

Thomas was up in the press box, however, not on the ice.

"That was awesome, a great tribute,''Thomas said after Monday's afternoon practice at the Garden.

On Tuesday, Thomas will take on the Bruins -- in Boston -- for the first time in his career.

The Panthers' veteran netminder spent a decade in the Bruins' organization before splitting after a tumultuous 2011-12 season to take a break.

According to Thomas, it was a much-needed respite from the game.

"It rejuvenated me, gave me a new life so to speak,'' Thomas said. "It's allowed me to again appreciate being able to play in this league.''

Thomas was engaging on Monday, speaking with reporters about a variety of subjects including his departure from the Bruins as well as reiterating that he feels his infamous White House snub following the 2011 Stanley Cup was "blown out of proportion.''

Thomas also said he is willing to go to Sochi if Team USA needs him.

"There's disappointment,'' said Thomas, who wasn't one of three goalies selected for the U.S. Olympic team on New Year's Day.

"But I'll be ready to take the call if something happens in the next week and a half if there was an injury and they want to bring me. That's how I'm looking at it.''

The Panthers were a team is disarray the last time they visited the Garden with Kevin Dineen not knowing he was coaching his last game with the Panthers back on Nov. 6.

The decision to replace Dineen with Peter Horachek had already been made as Horachek flew to New York so he could meet the team in Ottawa on Nov. 7.

Thomas didn't play in Florida's 4-1 loss to the Bruins, the final of six consecutive games he missed with a groin injury. The Panthers had lost seven straight games and Dineen paid for it with his job.

The Panthers were a woeful 3-9-4 at that time; thanks in part to strong play from Thomas, Florida has gone 18-15-3 since.

On Sunday, the Panthers rallied from a 4-2 deficit to beat the host Red Wings 5-4 in a shootout -- Florida's third straight road win.

"He's been really good for us,'' said Horachek, who celebrated his 54th birthday with Sunday's win.

"He gives our young guys a lot of confidence. When there's breakdowns, he makes big plays. He scrambles and is competitive. He has a smile on his face when he makes those big saves. It allows guys to settle down.''

Thomas says he is kind of glad he didn't play in that previous trip back as he was able to take it all in and enjoy himself, The Panthers could have used him, however, what was done was done. A win over the Bruins wouldn't have saved Dineen and his staff anyway.

"There was a flood of emotions, all good,'' Thomas said. "Being back in the city, seeing how people -- from hotel workers to cab drivers -- treated me, it was better that I wasn't playing. I got to appreciate it a bit more.''

Tuesday's game isn't the first time Thomas has faced his former teammates, however, as he took a 3-2 loss to the Bruins on Oct. 17 in Sunrise.

Thomas made 37 saves but Reilly Smith scored with 59 seconds left for the game-winning goal.

On Tuesday, Thomas brings a regular season record of 101-61-26 at the Garden. He won 29 of 50 postseason starts for the Bruins including 16 during that incredible run to the Cup not even three years ago.

Yes, Thomas made some great memories in Boston.

"Me and my wife have always been of the mindset that we can make a good life wherever we go.'' Thomas said. "We enjoyed ourselves in Boston but how can you not enjoy South Florida? It's pretty awesome.''

Horachek said Sunday that he hoped Aleksander Barkov (knee) would be able to meet the team in Boston and perhaps play Tuesday.

On Monday, Horachek said it's doubtful that his rookie center would play Thursday in Toronto. Horachek wouldn't rule out a Barkov return this weekend in Columbus.

Scouting report: The Bruins, who won four of six going into Monday's game at the Islanders, have beaten the Panthers five straight times.