NO TO OLYMPICS: Bergenheim Regrets Turning Down Finnish Offer 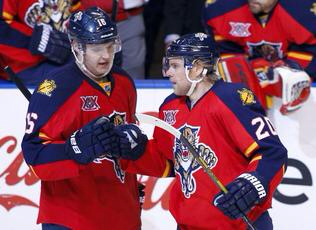 RALEIGH, N.C. -- Sean Bergenheim declined to take advantage of all the injuries besetting Finland's national team as he turned down an invitation to play in the Olympics.

Bergenheim, who turns 30 on Saturday, missed all of last season and a chunk of this one after having numerous surgeries related to his abdominal core.

This would have been Bergenheim's first trip to the games.

"For any athlete, having to say no to the Olympics is disappointing,'' Bergenheim said Saturday night.

"I had to make a decision with my best interests in mind. I really feel I need to the break. I'm happy with how far I have come, but I could take a real step forward after the break.''

Had he traveled to Sochi, Bergenheim would have been Florida's third player in Russia.

Aleksander Barkov (Finland) and Tomas Kopecky (Slovakia) plan to fly to Russia together from New York on Saturday. Broadcaster Steve Goldstein will be flying to Russia out of Miami.

Bergenheim added that he is not only going to get some much-needed rest during the break, but he'll be able to continue doing some rehabilitation as well.