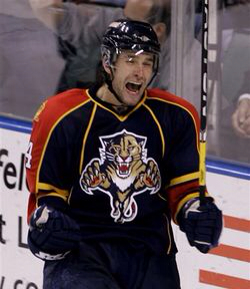 Dvorak, a rookie on Florida's Stanley Cup Finals team in 1996, was ejected from Carolina's 3-0 win over the Panthers after colliding with Luongo in the first period. Luongo remained in the game after the hit, one that looked more accidental than anything else, but didn't return for the second period.

Florida goalie coach Robb Tallas said during the second intermission that Luongo took a hard hit and was pulled purely for precautionary measures. Tallas added that he expected Luongo -- who suffered from a sore neck -- to play Saturday against visiting Montreal.

"They held him out for precautionary reasons,'' coach Peter Horachek said. "I'll have a report on Friday.''

Thursday's collision was one for the Panthers record books.

Dvorak had been Florida's all-time leader in games played after two stints with the Panthers before being passed by Stephen Weiss in 2012. Luongo is Florida's all-time leader in games played by a goalie yet the two have never been teammates with the Panthers -- although they have trained together in Coral Springs during the offseason.

Dvorak, who made the Hurricanes after a training camp tryout, rolled Luongo as he and Erik Gudbranson jockeyed for position driving toward the net. With Luongo on the ground, Gudbranson pounced and both teams ended up conversing in the crease.

Gudbranson was given two minutes for roughing but Dvorak was slapped with a five minute major and the automatic ejection that comes with a game misconduct.

"It was not intentional, I tried to stop,'' Dvorak said afterward. "That's not my game. I would never try and hurt the goalie. I got pushed a little and tried to hold up. I kind of felt bad. I never want to hurt anyone out there. It just happened.''

Carolina, which swept the season series for the first time, took a 1-0 lead when Jiri Tlusty froze Brian Campbell and Luongo and scored midway through the first.

Tlusty welcomed Dan Ellis to the Florida ice for the first time since joining the Panthers as the backup gave up his first goal 2:30 into the second as his defense broke down again in front.

Jeff Skinner made it 3-0 by poking a shot past Quinton Howden as Ellis was down on the ice 5:46 into the period.

Florida had numerous chances to get on the board in the second but Anton Khudobin (35 saves) made a number of great stops to keep the Panthers scoreless.

"It's never a fun situation knowing something is up with your [goaltending] partner,'' said Ellis, who stopped 18 of 20 shots. "That's the job and you have to be ready when they call you.''

Defenseman Tom Gilbert had sports hernia surgery in Philadelphia on Thursday morning and will miss the rest of the season.

Gilbert, a pending free agent, played through the pain of what he reportedly thought was a hip injury.

"He's been dealing with it for a while,'' Horachek said.

"He's been playing through it, taking therapy and medicine trying to keep it under wraps. It got to a point where something needed to be done. He had the appointment and now the surgery.''