« THAT'S ALL SHE WROTE: Panthers Finish Yet Another Regular Season Out of Playoffs with 3-2 Loss to Blue Jackets | Main | THEN WE WERE DONE: Panthers, Tallon Look Forward after Dismal 2013-14 Season » 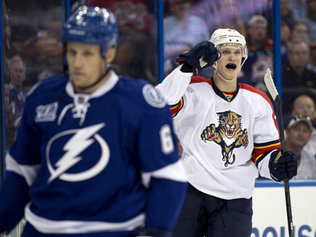 Nick Bjugstad ends the year as Florida's leading scorer with 38 points -- the lowest point total to ever lead an NHL team following a full 82-game schedule.

Scott Pellerin led the expansion Minnesota Wild with 39 points in 2000-01 despite ending the season with the Carolina Hurricanes.

"I did what I could do this season and it is what it is as far as the record goes,'' said Bjugstad, the first rookie to lead the Panthers in scoring.

"It's not one you think of very often so I hope it stays pretty deep in the books. .-.-. I don't know when it will be trumped. Or not trumped, however you want to put it. It's not an honor obviously, but it's my rookie year. I did my best and I learned a lot.''

Florida also became the first team to finish a season last in both power play and penalty kill since the 2009-10 Maple Leafs.