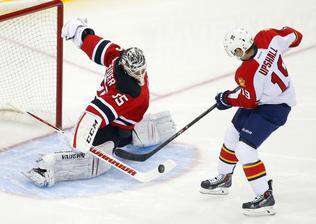 When the Dallas Stars took a 2-0 lead on the Panthers early in Sunday's game, they did so with a pair of players -- Jamie Benn and Tyler Seguin -- who have combined for 69 goals this season.

The Panthers don't have anything close to that kind of firepower.

Florida turned things around and scored three unanswered goals to put a dent in Dallas' playoff hopes with a surprising 3-2 win.

The Panthers' first goal came from Scottie Upshall, who took the dubious honor of being the the team's leading scorer.

Upshall leads the Panthers with 15 goals and 36 points -- which has him tied for 171st in individual scoring as of Monday morning.

With three games to go, the Panthers are flirting with history.

In 2001, Minnesota's Scott Pellerin became the player with the fewest points to lead an NHL team in scoring over the course of an 82 game season.

Pellerin did so on an expansion team (one he didn't even end the season with) by scoring 39 points -- currently three more than Upshall currently has.

Florida's previous low for leading scorer in a full season was 49 by Stephen Weiss in 2010-11. Pavel Bure also led the team with 49 points in 2001-02 despite being traded to New York that March.

Tomas Fleischmann had 35 to lead the team in last year's 48-game season but has 27 points in 77 games this year.

"It's kind of embarrassing that we don't even have a guy with 40 points,'' Upshall said Sunday night. "There's no leading scorers on this team. We all have to realize we need to be better. You chip away, learn to bury your chances.''

Upshall's 36 points are most in his NHL career eclipsing his previous high of 34.

"Scottie shouldn't be our leading scorer. But he is,'' coach Peter Horachek said. "It's a tribute to him for working hard and doing what he's had to do, but we know where we need to improve. When your first-year players are creating a lot of your offense, there's a problem there too.''

Florida's scoring problems aren't something new as the team has struggled to put pucks in the net for years.

This year, the Panthers are second only to Buffalo for fewest goals scored with 180 (2.3 per game).

The Panthers have ranked in the bottom five of the league in goals scored for five straight seasons. Florida ranked 17th with 231 goals scored in 2008-09.

Getting some scoring help over the summer is definitely Florida's biggest priority.

This offseason, general manager Dale Tallon says he has the money to try and help rectify Florida's scoring deficiencies. But will he completely be able to?

There aren't that many top-end scorers expected to be on the free agency market, although one could be procured in a trade as how Dallas scored Seguin last summer.

Florida seemingly has a pretty good core of young players who can help create offense with big physical centers like Aleksander Barkov (who was among team leaders in scoring before being hurt in the Olympics) and Nick Bjugstad (second on the team with 35 points).

The Panthers also have a few players who have shown they can score at lower levels such as Jonathan Huberdeau, Brandon Pirri and Vincent Trocheck.

Adding a few veteran scorers around the young players they have -- and hope for bounce-back years from the likes of Fleischmann and Tomas Kopecky -- could get the Panthers at least closer to the middle of the pack in league scoring.

With the goaltending Florida has, that could be enough to have this team in playoff contention come this time next year.

"If we get a guy who can score 60, 70 points, we'e going to be a much better team,'' Upshall said. "It could be a guy in this room or it could be a guy we go out and get. We need someone to really step up and score the big goals and carry the team offensively. It's an area we need. Some of the young guys have been doing it.''

Shore has played in 64 games for the Panthers over the past two seasons.

Since his 43 games played over last year's shortened season were prorated, Shore only has four games left before he becomes waiver-eligible. That means if the Panthers want to send him back to the minors after he crosses that threshold, they could lose him to another team for nothing.

With three games left in this season, Shore would not have to clear waivers if Florida wanted to send him back to San Antonio after training camp next October.

Scouting report: The two have split the season series with Florida winning the past meeting back in November. The Flyers, who hold down the third spot in the Metropolitan Division, had lost four straight before dropping the Sabres on Sunday night.