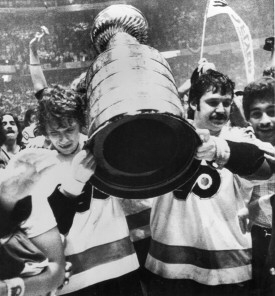 The Panthers hoped to put Philadelphia's playoff party on hold just another day bolstered by the addition of three forwards to the lineup.

Alas, Roberto Luongo came out of warmups complaining of what coach Peter Horachek described as being sore and the Flyers took full advantage. Philadelphia scored three goals off its first four shots in the second and clinched a spot in the Stanley Cup playoffs with a 5-2 win at BB&T Center.

The Panthers, meanwhile, will miss the postseason for the 12th time in 13 seasons. In the franchise's 19 seasons, it has missed the playoffs 15 times.

"It was a terrible second period and you can't expect to win when you play like that,'' said Erik Gudbranson, whose long shot put the Panthers on the board early in the third to make it 4-1.

If the Flyers thought they had an easy one on their hands, the Panthers looked like they wanted to prove them wrong.

Florida played one of its best periods of the month in the first, dictating play and surviving what could have been a disastrous penalty kill late.

First, Drew Shore -- brought up from the minors on Monday -- drew four minutes in the penalty box for drawing blood with a high stick on Wayne Simmonds.

With 1:40 left in that penalty, Scottie Upshall was called for slashing, giving the Flyers a two-man advantage for 100 seconds.

Although the Flyers challenged backup goalie Dan Ellis, they didn't get anything through and the two went into the first break still scoreless.

Florida's tough play didn't last, however, as the Flyers scored two quick goals to kick off the second and all but stamp their ticket to the playoffs.

"It was a good start and then in the second I gave up four crap goals,'' said Ellis, who faced 12 shots in the second. "It's unacceptable. It's frustrating as hell when you're the primary reason for the loss. I take responsibility for the loss.''

The Flyers got its first when Vincent Lecavalier -- who long owned the Panthers from his days in Tampa -- jammed one through Ellis' skates 2:02 in.

Lecavalier became the seventh player in the Flyers' lineup to hit the 20 goal plateau; Florida has one.

Four minutes later and Claude Giroux made it 2-0 by scoring his first of two, this one off a nice slap shot from 20 feet out. The Flyers scored their third at 8:50 of the second from Giroux and led 4-0 with five minutes remaining in the period.

-- Aleksander Barkov practiced Tuesday but it's doubtful the rookie center will play again this season.

Barkov has been out since re-injuring a knee representing Finland at the Olympics in February.

"I could've played better but then I had the injury,'' Barkov said. "I will go back to Finland, practice a lot and I'll be a better player next year. Now I know I can play on this level and I want to be better.''