THAT'S ALL SHE WROTE: Panthers Finish Yet Another Regular Season Out of Playoffs with 3-2 Loss to Blue Jackets 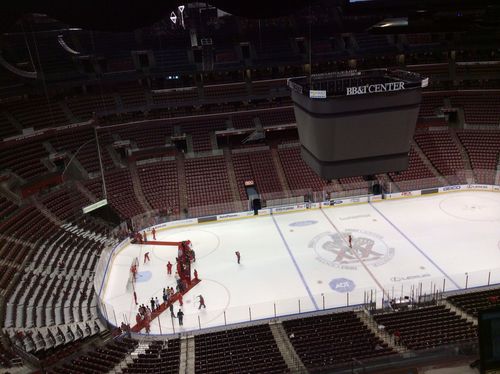 The Panthers' 20th anniversary season began with a victory but wins came few and far between following opening night in Dallas.

On Saturday, Florida lost for the 53rd and final time this season as Columbus swept the season series with a 3-2 win at BB&T Center.

As the Blue Jackets head to the playoffs for the second time in their history, the Panthers go into another offseason without playoff hockey.

Florida missed the playoffs in 12 of the past 13 seasons and 15 of 19 overall. The Panthers will finish no better than 28th in the 30 team league fresh off a last place finish in 2013.

"It's a really bad feeling knowing that you're done, that you're not coming back to practice,'' said coach Peter Horachek, whose status for next year is not known.

"It's not a good feeling knowing we're not preparing for the playoffs. The most exciting and best part of the season starts now. I want our players to feel that. It's not about playing hockey; it's about making the playoffs. It's where we need to be.''

General manager Dale Tallon spoke before Saturday's game of his vision for a brighter future -- one that involves spending a lot more money -- but before Tallon can go to work, this wreck of a season finally had to come to a close.

Saturday, the Panthers played a pretty decent game against a Columbus team that dominated play in the first two games earlier this season.

Florida was in a scrappy mood after the Jackets took a 1-0 lead 47 seconds in on a Cam Atkinson goal.

Ed Jovanovski and Erik Gudbranson mixed it up a few times before Jovanovski was kicked out for his elbow to the head of Corey Tropp.

That penalty kill led to a shorthanded goal as Vincent Trocheck picked off the puck in the Florida zone and walked in on Sergei Bobrovski and scored with 1:01 left in the opening period.

Florida took its first lead of the season on the Blue Jackets early in the second when Jimmy Hayes scored on a nice slap shot, only the Blue Jackets scored the next two goals to escape Sunrise and head into the postseason.

"We obviously have a talented young group but we need more time to develop together,'' said Hayes, who ended with 11 goals. "I think we have a bright future here. We need to gel, get off to a good start next year.''

Columbus' win assures them of a first-round date with the Pittsburgh Penguins. A loss and the Jackets could have been forced into a meeting with the dreaded Bruins.

For Florida, well, Sunday means locker clean out day and the team dinner.

"It's going to be great to see our young guys develop,'' goalie Roberto Luongo. "We're all excited to see what happens over the next couple of months. Then we'll get back together and start playing hockey again.''

-- Scott Clemmensen suited up in a Panthers jersey for the what is probably the final time on Saturday morning. Clemmensen was one of three goalies on the ice for morning skate but later in the day was sent back to AHL San Antonio.

Clemmensen is a free agent after five seasons with the Panthers.

-- Travis Viola, the Panthers' Vice President for hockey operations, will represent the team in Toronto for Tuesday's draft lottery drawing.

"That's why I'm not going this time,'' Tallon joked.