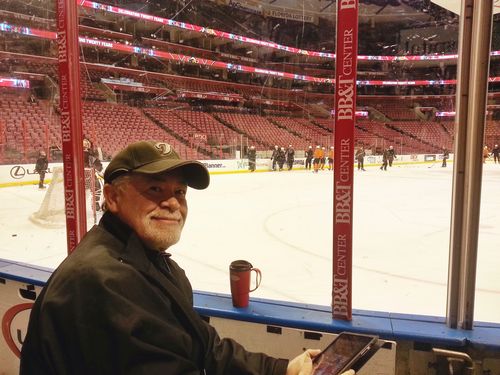 It all started in 1993. Then working as a referee doing men's league games at a skating rink in Lighthouse Point, Ron Young was approached to be an off ice official and work NHL games for the newly-created Florida Panthers at Miami Arena.

Young hopped at the chance to work in the NHL and today is one of three original hires still doing the games in Sunrise.

On Saturday, Young's 20-year run with the NHL and the Panthers comes to a close. Young has decided to move back to Toronto full-time.

Since retiring from his job in the transportation sector, Young shuttled between South Florida and Canada to see his three grandsons, but those long commutes are about to come to a close.

As is Young's up-close view of the NHL. He doesn't expect to find this kind of work in hockey-mad Toronto although he's hopeful. Before the NHL came calling in 1993, he never thought he would have been doing this either.

"These have been some great times and it has been fun to be part of it,'' said Young, who as crew supervisor and game timekeeper, works at center ice directly between the two penalty boxes at BB&T Center.

"For 41 nights a year, I've just loved coming to work. To be able to watch the game at this level has been terrific. But there's not much turnover for these jobs in Canada. They are gold. You are in it until they carry you out basically. But you never know. Someone may retire. It would be a dream come true if I could continue on.''

When the Panthers are in town, so is Young. He spends his game mornings at the arena in a spot down near the Zamboni tunnel drinking his home brewed Tim Hortons' coffee and catching up on the latest hockey news on his iPad.

Players and coaches from the Panthers as well as the visiting teams always skate by to say hello, Young's faded Toronto Blue Jays cap as recognizable as his goatee.

When Young started this part of his career, he was working in the transportation business and was living in Cooper City. His job offered the perks of many frequent flier miles, although Young says they went fast.

In his time with the Panthers, Young has seen some bad hockey but also worked every playoff game in franchise history. He also had the honor of working Game 7 of the 2004 Stanley Cup Finals when the Lightning brought the Cup to the Sunshine State to stay for the first time.

Now he has two games left. With his three grandsons all playing youth hockey, however, he'll remain close to the game he loves.

"It's a little bittersweet because I've been here 20 years,'' he said while watching the Flyers skate on Tuesday morning. "Hockey, to me, is a passion. I'm going to miss it, miss the people I interact with on a nightly basis. But I'm looking forward to revisiting a time when my son played, the 6 a.m. practices sitting in the stands with a cup of Tim Hortons watching them play.

"And I'll have the Center Ice package so I'll be watching the Panthers every night anyway.''

Scouting report: The Leafs were officially eliminated from the playoffs with Tuesday's listless 3-0 loss at Tampa Bay. The Leafs have lost 10 of 12 and haven't made the postseason since 2004. Florida has won two of the three meetings this year.