« PETER HORACHEK FIRED: Who Is Next for Florida Panthers? | Main | PANTHERS TRIM STAFF: Mass Layoffs in Sunrise on Monday »

KEVIN DINEEN: Ready to Return to the NHL ... Carolina a Perfect Fit? 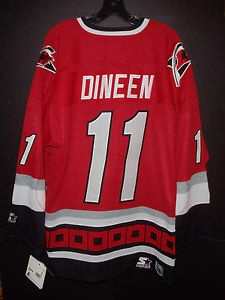 After a few months of forced vacation and quite a bit of international travel with Team Canada, Kevin Dineen is ready to return to the National Hockey League.

Dineen, fired as coach of the Panthers in November, has been mentioned as a candidate for a number of openings around the NHL most notably in Carolina.

"I'm actively looking but patiently waiting to see how things play out,'' said Dineen, who spent two-plus seasons with Florida.

"I'll see how these scenarios play out. It's unfortunate this carousel continues with all the openings every year. But that's just part of the business.''

Although Dineen wouldn't speak about the Hurricanes specifically, he appears to be a perfect fit in Carolina.

Dineen spent parts of 12 seasons with the Hartford/Carolina franchise after being a third-round pick by the Whalers in 1982. Dineen holds the distinction of being both the final Whalers' captain and first in Carolina after the franchise relocated and rebranded. 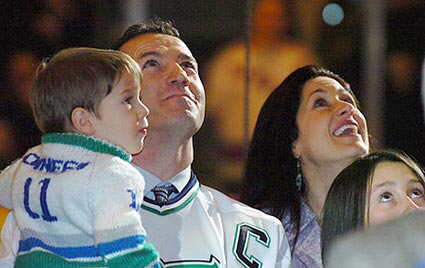 Dineen, who spent two seasons in Carolina before ending his career with Ottawa and Columbus, remains good friends with former teammate and new Carolina general manager Ron Francis. Dineen is also close with the Hurricanes ownership group which owned the team during his playing days.

Other openings around the league include Washington and Vancouver. The Panthers obviously are looking as well after firing Peter Horachek -- who replaced Dineen on an interim basis on Nov. 8. 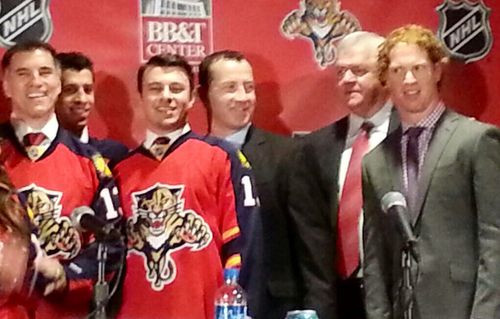 On Thursday, a Florida spokesman said Dineen -- who is under contract with the Panthers through June 30 -- has been granted permission to speak to other teams about their vacancies.

Florida GM Dale Tallon and the Panthers didn't stand in Dineen's way when he was approached to coach the Canadian women's national team at the Sochi games nor Canada's entry at the Under-18 men's World Championships in Finland.

For Tallon, firing Dineen wasn't personal although it was a tough decision to make.

"Decisions like those are difficult, they're never easy,'' Tallon said last month. "I've made them before and you have to move on, do what's best for the organization in spite of your relationships. It's never easy. We have to do what's right for the Florida Panthers, that's it.''

Dineen said his early days of unemployment involved some fishing in the Keys as well as watching and coaching his kids' youth hockey teams.

In December, things changed. Team Canada coach Dan Church abruptly quit and Dineen was offered the gig. All of a sudden, Dineen back in the game.

Dineen guided the Canadian women's team to the Gold medal in Sochi with a rousing 3-2 overtime win against Team USA. Canada trailed 2-1 in the final minute before tying it and winning Gold in the extra session. 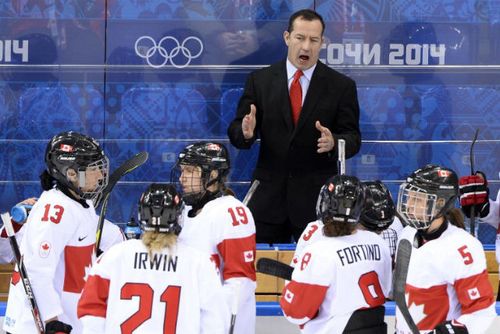 "I haven't had to buy a beer in Canada in three months,'' Dineen said. "Everyone loves telling you where they were watching the game. It took the country by storm. To be a small part of that is something that will stay with you for a long time.''

Although Dineen and his coaching staff didn't get medals, they will be honored -- along with the Canadian men's team -- next month in Vancouver where Dineen will get a championship ring he couldn't have imagined when the Panthers opened training camp in September.

"It was one of those special, once-in-a-lifetime experiences,'' Dineen said. "My whole family was there which was great. The ending was obviously pretty dramatic, but the whole experience was fabulous. We had a bunch of high-achieving bunch of players who were a joy to coach. They kept me on my toes, that's for sure.''

Dineen said he didn't watch the Panthers very much upon being fired and replaced behind the bench by Horachek.

Florida made the decision to fire Dineen before its game at Boston on Nov. 7 (a listless 4-1 loss to the Bruins to extend the team's losing streak to seven games) and informed him of the decision the next morning at the team's hotel in Ottawa.

"You go through a range of emotions after something like that,'' Dineen said. "I've been traded before, but in nine years as a coach, I'd never been fired. You're mad, then sad, then you analyze where you were and what you could have changed. At the end of it, there's a level of responsibility you have. I coached an NHL team. I'm always grateful for that.''

Dineen left the team in Ottawa and headed for his offseason home in Maine before rejoining his family in South Florida. Dineen said the first time he watched a Florida game after his dismissal came when he and his son William -- who had just completed a tournament at Notre Dame -- were in Chicago on Dec. 8.

The Dineen's planned to go to see the Panthers play Chicago as a guest of Blackhawks coach Joel Quenneville -- only William went with Quenneville's wife Elizabeth and Dineen stayed behind at Quenneville's house and watched the game on television.

"That was the first game I watched,'' Dineen said, "and I did it sitting on the couch of the other coach. But I'm still a fan of people there in the organization, players and staff there. I wish them well. There are mixed emotions, sure, but life is about the relationships you make.''

Dineen has stayed involved with Team Canada as he was the head coach of the Under-18 national team. He was assisted by former Panthers defenseman Gord Murphy (who along with Craig Ramsay were fired as Florida assistant coaches along with Dineen in November).

After winning the bronze in Finland, Dineen says he's been touring the Sunshine State while he's still local. Next month, the Dineen family moves north. 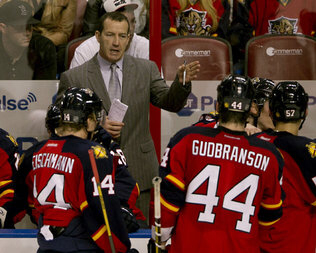 Where he lands, right now, is not known.

"Some of my players from Olympics are coming down to take advantage of the weather down here,'' Dineen said not long after a day at Universal Studios.

"I've been to the Keys and now Orlando. I don't want to leave any stone unturned while we're still in the area. It was a great experience here, and we really enjoyed it.''