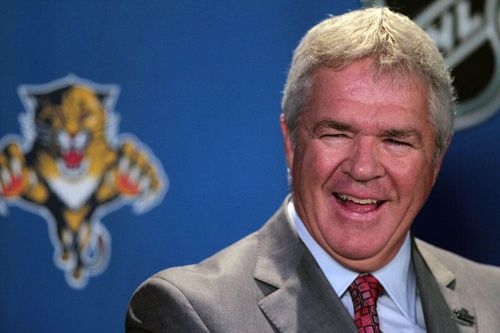 Between interviewing players, coaches and potential executives, this has been quite a busy time for Dale Tallon.

Not only do the Panthers have the first pick in the upcoming draft, but Florida has a vacant positions at head coach and assistant general manager.

Tallon said on Friday night that he would have a new coach in place by the draft "at the latest" although he expects to have one hired before that.

Tallon said he has spoken to 12 candidates for the job, but said he had not spoken with former Pittsburgh coach Dan Bylsma as of yet. Bylsma was let loose by the Penguins on Friday morning.

"I do believe we will talk,'' Tallon said, "and see what his interest level is.''

Tallon added that he and Bylsma got to know each other while working for Team USA. "He's a fine gentleman,'' Tallon said. "I like him.''

As far as Florida's top pick in the draft, Tallon said he's fielded plenty of calls but no deal is imminent. With the draft three weeks away, Tallon has plenty of time to talk to teams interested in it.

"We have lots of time to find out what the value of this pick is,'' Tallon said. "We're in a great position. If we keep the pick, we're going to get a great player back in return. If we deal it, we'll get some assets coming back.''

Tallon also said that former Florida center John Madden -- who won the Stanley Cup three times with New Jersey and Chicago -- would be back next season as an assistant to the new coach. Madden started last season as a scout but joined Peter Horachek behind the bench when Kevin Dineen was fired in November.

Brian Skrudland could also return as an assistant, but that would be up to the new coach. Skrudland is under contract through the upcoming season so it's possible that he could return to working in player development although he said he would be interested in returning as an assistant coach.

Florida goalie coach Robb Tallas has an expiring contract on June 30 but Tallon said "we would like to have him back.''