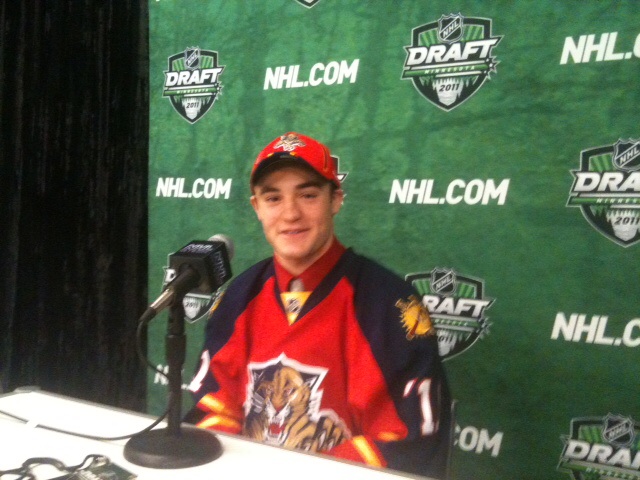 TWITTER: @GeorgeRichards
After two strong years at the University of North Dakota -- the last of which he led the Sioux in scoring -- Rocco Grimaldi is ready for the next challenge in his career.
It all starts this week with the Panthers.
Grimaldi, 21, is one of Florida's more promising prospects although unlike some of at this development camp, he'll have a chance to shine at training camp in September.
Even though the Panthers went out and signed a number of forwards making the competition for a job even more fierce, Grimaldi isn't shying away from the fight.
"It was just time for me,'' said Grimaldi, who left North Dakota with two years of eligibility remaining to sign a three-year entry-level deal with the Panthers in May.
"I'm one of those people who likes a new challenge and wants to do something that's a little harder than expected. Moving on was hard because I loved North Dakota, the team, the people there. But, it was time for me to challenge myself against the best players in the world. I want to see where I'm at, how I can keep getting better.''
Listed on the roster at 5-6, Grimaldi is easy to spot on the ice because he is the smallest.
His lack of height, however, has never defined Grimaldi's game and he is determined to make sure the Panthers pay him notice.
In two-plus seasons with the Sioux -- a knee injury in his fourth game at UND forced a redshirt season as a freshman -- Grimaldi scored 31 goals with 46 assists. His 17 goals and 39 points led the Sioux last season.
Despite his size, the Panthers liked what they saw in Grimaldi when they made him a second round pick (33rd overall) in 2011.
Florida knew the California native was headed to college and hoped to see his game grow.
The Panthers haven't been disappointed.
"He's such a dynamic player,'' said Brian Skrudland, the Panthers' first captain who is their director of player development.
"When I went to North Dakota and was sitting in the crowd, I felt so proud that Rocco Grimaldi was a Panther. People were talking about him, saying in warm-ups 'watch that little guy, he's going to light it up.' He never disappoints. He comes with an effort and has a great attitude.''
Last year at North Dakota, Grimaldi was a postseason hero, recording his first hat trick (Grimaldi's final two goals were into an empty net) in the Sioux's 5-2 victory over Wisconsin in the NCAA regional semifinals.
The MVP of the NCAA Cincinnati Regional, Grimaldi helped the Sioux reach the Frozen Four with a 2-1 win over Ferris State in double overtime.
As a freshman, not only did Grimaldi lead all North Dakota rookies in scoring, but he helped lead Team USA to Gold at the World Junior Tournament. In the Gold medal win over Sweden, Grimaldi not only tied the score with a goal, but ended up winning it with one as well.
"Those memories stay with you forever,'' he said. "Those three years are ones I won't forget.''
After this past season, Grimaldi made the decision to leave college and fight for a job with the Panthers.
Not only is Florida flush with talented young forwards, but the Panthers signed four more during free agency.
"I think it's good. I like a challenge,'' Grimaldi said. "It's good to have those kind of players here. I'm excited about what the future holds for the Panthers. We're going to do some good things in the coming years and I'm happy to be a part of it. If playing in the NHL easy, everyone would do it. It's all about the sacrifices you're willing to make.''
If Grimaldi doesn't start the season with the Panthers, he'll likely make his professional debut with Florida's AHL affiliate in San Antonio.
Don't count him out just yet, however.
"He might just be that guy that says, 'you know what? Brendan Gallagher did it in Montreal and I'm not going to San Antonio','' Skrudland said. "It's on him to decide, for him to make the decisions really hard on the coaches in September and October.''
Although Grimaldi is aware of the probability of starting the season in the minors, that doesn't mean he is accepting of it. No, Grimaldi's goal is to be with the Panthers not sometime in the future, but from now on.
"I've always been told to focus on the big picture and [San Antonio] is something that could happen,'' Grimaldi said. "But right now I'm not focused on that. I'm focused on making the team. I won't be shocked or upset if it doesn't happen. I'm excited. We have a good, young core group. There's a lot of opportunity.''
PANTHERS ADD DUO
The Panthers added some depth on Tuesday by signing center Brett Olson and defenseman Greg Zanon to one-year deals.
Both players have two-way provisions in their contract.
Zanon gives Florida an option on defense as the 34-year-old has played in almost 500 NHL games with Nashville, Minnesota, Boston and Colorado. He spent last season with San Antonio.
Olson, 27, has played in 145 games for the Abbotsford Heat of the AHL over the past two seasons.
-- The Panthers won't have an on-ice session Wednesday as development camp moves east. The team plans a beach day for its young players as well as some community service.
On-ice activities return Thursday morning at 8:15 at the Panthers IceDen in Coral Springs. The sessions are free and open to the public.