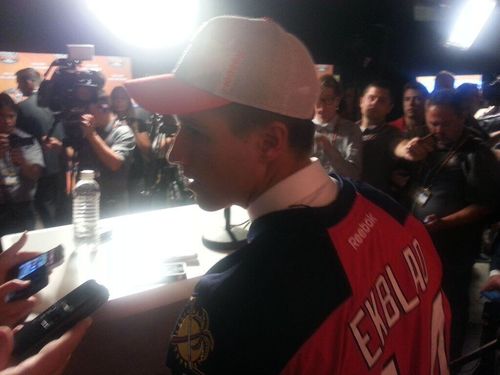 The Panthers have been in contact with Team Canada -- Ekblad was training with them at the time of the collision -- and feel confident Ekblad will be ready for training camp next month.

"We have been in communication with Team Canada and have mutually agreed to hold Aaron out for the remainder of the summer development camp as a precautionary measure,'' Florida GM Dale Tallon said in a statement.

"We will closely monitor Aaron’s health for the remainder of the off-season and expect him to be ready for our rookie camp in mid-September."

Ekblad, the first overall pick of the 2014 NHL draft, was crushed by a pair of players from the Czech Republic team and left the ice.

Team Canada said that Ekblad will be held out of the rest of the Canadian World Junior development camp.

Ekblad was on the Canadian team that finished fourth at the tournament last December although he probably won't play in the tournament this year; he's expected to spend the season with the Panthers.