« WINGING IT: Sean Bergenheim's wrister, Roberto Luongo's goaltending lift Panthers to first win of season 1-0 over Buffalo | Main | GETTING AFTER IT: Panthers defense keeping things close despite offensive woes ... Brandon Pirri happy to be back in the lineup » 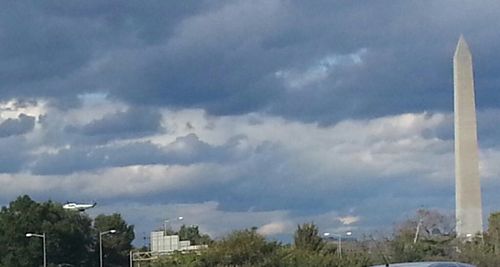 TWITTER: @GeorgeRichards
WASHINGTON -- Verizon Center has brought the Panthers nothing but pain in recent years only Saturday night was different.
Yes, the Panthers' 2-1 shootout defeat was their 10th loss in the past 11 games here.
But to get a point in the standings against the Capitals after winning the previous night in Buffalo gives Florida something to build on.
"That was a great road point,'' general manager Dale Tallon said afterward. "We'll take it.''
Florida hasn't won in Washington since 2010 yet had chances Saturday to turn that tide.
Brad Boyes tied the score at 1 early in the third period and Florida stuck around against backup goalie Justin Peters.
Washington's Alex Ovechkin, whose shootout goal ended things in an abbreviated third round, had a tremendous scoring chance snuffed out in the final seconds of regulation as Erik Gudbranson and Derek Olsen converged on the Capitals' star and knocked the puck free.
"Our guys showed character,'' said goalie Al Montoya, making his first start in relief of starter Roberto Luongo.
"It's not always easy. This is a tough building to come and play in and it was a one-goal game throughout. We battled back and got a point. I wanted to be the difference in getting the whole two points but I wasn't. We'll come back at it.''
Washington took its initial lead late in the opening period when Jason Chimera took a slick feed from Eric Fehr and faked out Montoya before popping the puck into the back of the net.
Montoya ended with 27 saves.
"[Chimera] sold me and I slid,'' Montoya said.
The Panthers didn't do much offensively until the third period rolled around and Boyes' picked up his first goal of the season.
Boyes' goal came on Florida's fourth power play of the game.
The Panthers have only scored five goals through their first five games of the season. Two of the goals have come on the power play.
"We've got to find ways to score more,'' Boyes said. "We've got to find more offense, sustain more pressure. They have a good team, but we have to realize that we do as well. We've got to start playing in sync a little but more. But we got one point and that's always important.''
The Panthers had plenty of chances to break the tie in overtime, with Nick Bjugstad getting perhaps Florida's best look.
In the shootout, Washington went first and connected on all three of its shots.
Jonathan Huberdeau scored on Florida's first chance but Jussi Jokinen was stopped on the second and the Panthers never got a third shot down 3-1.
"This was obviously a big point, Washington is a good team who plays well at home,'' coach Gerard Gallant said. "We picked things up in the third. We would have liked to get that second point in overtime, had some chances, but this was a good effort.''
NEWS, NOTES
Jacob Markstrom looked right at home playing in San Antonio on Friday night as well he should have.
Markstrom, who was Florida's top goalie prospect, made his first appearance in San Antonio since Florida traded him to Vancouver in the Roberto Luongo deal last year.
Markstrom stopped all 28 shots he faced in shutting out his former teammates as his Utica Comets beat the Rampage 3-0.
Dan Ellis, who was making his second start of the season for Florida's AHL affiliate, stopped 21 of 24 shots and took the loss.
-- Brandon Pirri was in the lineup for the first time this season in place of center Dave Bolland (lower body). Gallant also replaced Jimmy Hayes with Shawn Thornton.
"I thought he was good,'' Gallant said of Pirri. "He's a skill player and put two or three shots up and had a chance.''
-- Saturday's game was Florida's first in the shootout this season. The Panthers have picked up at least a point in all three road games this season.
The Panthers are winless in two overtime games, losing at Tampa Bay and Saturday in Washington.