SHUT OUT, SHUT DOWN: Panthers offense continues to sputter in 1-0 loss to Senators ... All-time low home attendance for Panthers 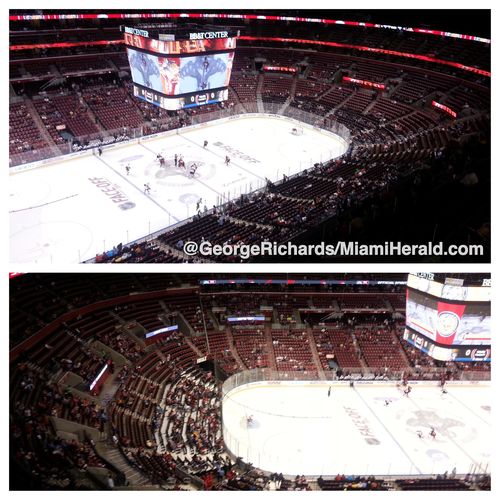 The energy put forth between the Senators and Panthers on Monday mirrored the apathy in the stands for much of Monday night.
Playing in front of the smallest announced home crowd in franchise history, the Panthers failed to get much going and fell 1-0 to Ottawa at BB&T Center.
Both teams seemed to sleepwalk through a game with little buzz and even less action.
Ottawa broke the scoreless tie 35 minutes into the game when Clarke MacArthur scored on a power play. That was enough for former Panthers goalie Craig Anderson as he shut out Florida for the third time in his career.
"The goalie won that game for them,'' general manager Dale Tallon said.
The announced crowd of 7,311 was lowest in franchise history, beating the 10,063 from a Halloween game against Carolina in 2007.
Capacity at the building, which opened in 1998, is 19,250.
"I don't pay attention to that stuff when I'm playing, I just focus on my job,'' goalie Roberto Luongo, who made 22 saves, said afterward.
"If we want to get some people in the stands we need to start winning some games.''
The Panthers haven't exactly given their fans much of a reason to rush to the arena. The team has been to the playoffs just once since 2000 and finished at the bottom of the league the past two seasons.
Now winless in three games, the Panthers are off to their worst start in seven seasons as the team has just three goals.
"It's not the end of the world right now,'' Scottie Upshall said. "We have a few days to work before we go on our road trip and have some games against good teams who are also hungry for wins. We need to put this behind us, just focus on putting the puck in the back of the net.''
Florida looked to take the initial lead on Anderson in the opening period but Jonathan Huberdeau shot high on one big chance. Brad Boyes misfired on another in the final minutes of the period.
In the second, Nick Bjugstad -- who rang a shot off the post midway through the period -- went to the box for hooking.
MacArthur made Florida pay as he walked in on Luongo and scored on a nice deke move as he closed in.
"We need quality chances,'' Bjugstad said. "If we got a goal there, we would have a chance.''
The Panthers only challenged Anderson (30 saves, 27 career shutouts) a few times as Florida went 0-for-3 on the power play and now has just one goal in 13 chances with the man advantage.
Both teams went 0-for-4 during 6:03 of four-on-four hockey.
"We played a good, hard game and had plenty of scoring opportunities,'' first-year coach Gerard Gallant said. "A 1-0 game is a tough game to lose, but I thought we played real well.''
McLENNAN RETURNS
Jamie McLennan was only with the Panthers for one season in 2005-06, but he and Luongo became such friends that one of Luongo's demands to the team before signing a new contract was that McLennan return as his backup.
Luongo, of course, was traded by then-GM Mike Keenan to Vancouver and McLennan left town as well.
On Monday, McLennan was back in Sunrise as a television analyst -- the first time he had been back in the arena since his playing days.
McLennan and Luongo have remained friends over the years and said it was good for Luongo to leave the Panthers for a bit.
"I was relieved when he came back because I don't think he should have left in the first place,'' McLennan said.
"But it was good for him because it was a little like LeBron leaving Cleveland. He got his accolades, became a better goalie and got the recognition in the hockey world he didn't get here.''
-- Former Panthers coach Doug MacLean (1995-97) and captain Scott Mellanby were both at Monday's game as was Ottawa general manager Bryan Murray who spent time as coach and GM of the Panthers.
NEW LOW
Florida Panthers lowest announced home game crowds
1. 7,311; Oct. 13, 2014 (Ottawa)
2. 10,063; Oct. 31, 2007 (Carolina)
3. 10,069; Oct. 15, 2003 (Phoenix)
4. 10,074; Dec. 3, 2013 (Ottawa)
5. 10,081; Oct. 31, 2006 (San Jose)