WOULDA, COULDA, SHOULDA: Aaron Ekblad thriving with Panthers, knows he could have been a Sabre 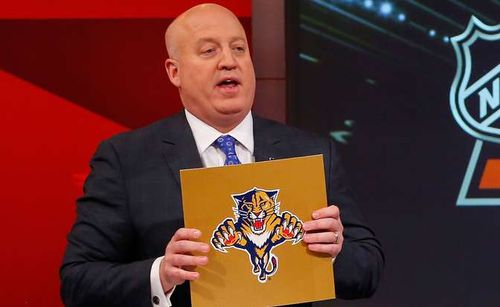 TWITTER: @GeorgeRichards
When Aaron Ekblad jumps on the charter jet Thursday afternoon he will be going from his new home in the Sunshine State to a town that could have been his new place of residence.
The Panthers visit Buffalo on Friday night and it isn't lost on Ekblad that he very well could have been wearing a Sabres jersey in that game.
Although Buffalo finished with the worst record in the NHL last year, Florida won the draft lottery and jumped the Sabres to the top of the list.
Florida selected Ekblad with the top overall pick; Buffalo was expected to have done the same.
"I always think about things that could have happened, but I couldn't be happier than where I am right now,'' Ekblad said.
"This is probably the best place for me to have the opportunity to play and I love it here.''
Ekblad has played well in his first three NHL games with the Panthers.
Paired with veteran defenseman Brian Campbell, Ekblad has definitely not looked out of place as he did at times early in the preseason and has been doing some good things with the puck.
Although the Panthers have the option of sending him back to his junior team after nine games without him burning a year off his contract, it doesn't appear that Ekblad is going anywhere.
Ekblad says he feels confident in his game and is feeling more and more like an NHL player. He says he doesn't even think about going back to play major-junior hockey because he's a part of the Panthers now.
"You're going against pretty good players and have to respect that,'' Ekblad said. "You don't like to make mistakes and want to capitalize on your talents. So confidence is a big thing. If you make mistakes, don't dwell on them. I have such good support here, it makes things a bit easier.''
Coach Gerard Gallant said Wednesday that even thought Ekblad may be the youngest player in the NHL, he hasn't looked it.
Ekblad's time on the ice has increased in each game. In the opener against Tampa Bay, he played 19 minutes off 20 shifts. Monday, he got 24 shifts and almost 24 minutes of ice time."The kid is playing the way we want him to,'' Gallant said. "He's looked good. He's playing the way he did in junior although he's playing against men, against NHL players so he's not getting the scoring chances he did. Still, he's putting the puck to the net, moving the puck and defending real well. He's getting better every game.''