« BACK IN SUNNY FLA: Panthers recall Rocco Grimaldi, Vinny Trocheck ... Duo ready to make their mark | Main | ROBAK GOES FROM D TO LW: Panthers ask defenseman to step up to fourth line in Saturday's 2-1 win over Flyers ... Roberto Luongo not upset about losing another shutout » 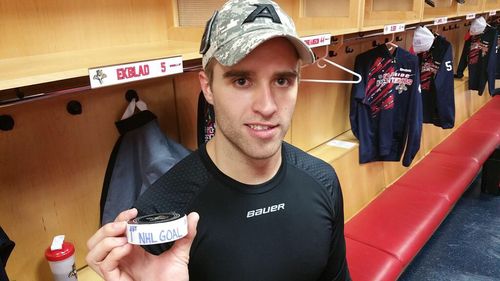 TWITTER: @GeorgeRichards
The Panthers were so banged up Saturday they were forced to use a defenseman as a winger.

Yet Florida still had Roberto Luongo, and truthfully, that was good enough.

The Panthers got goals from Willie Mitchell and Aaron Ekblad but Luongo stole the show in Florida's 2-1 victory over Philadelphia at BB&T Center.

"I don't think a lot of people give us a chance to begin with,'' said Luongo, who stopped 36 shots.

"I think the guys are starting to realize we have a pretty good team here. You're seeing that confidence every game. Even though we're not blowing people out, we're finding ways to win. That's key, especially at the beginning of a season.''

Luongo, who had shut out the Flyers until Vinny Lecavalier scored with 7.4 seconds left, led Florida to its second straight win.

The Panthers are 4-0-2 in the past six grabbing 10 of 12 available points in the standings.

In the past four games, Luongo has stopped 137 of 144 shots. In the previous two games, the opponent has scored just once.

"I feel pretty good, the puck's hitting me,'' Luongo said afterward. "You just want to keep it going. It's a combination of many things. Our guys are playing hard, putting pressure on them by not giving them time or place. I wouldn't be playing this well if not for the guys in front of me.''

The Panthers were down five forwards with four guys hurt and Jonathan Huberdeau out with the flu.

Coach Gerard Gallant had no other choice but to give defenseman Colby Robak his first start of the season -- only instead of playing defense he joined up with Florida's fourth forward line.

Robak's line played well enough the Gallant told him he should have played more.

"He was awesome,'' Gallant said. "He had some great scoring chances and played real well. We were short with [Huberdeau] having a touch of the flu. He was the only extra guy we had. The more he played the better he was.''

Despite all its issues, Florida didn't back down and took the game to a Philadelphia team that had spent the past few days on Fort Lauderdale beach after winning three of four.

Florida took a 1-0 lead in the first on a long shot from Mitchell and then held on by stopping six Philadelphia power plays before Ekblad gave the Panthers some breathing room with 4:22 left.

Ekblad, the 18-year-old rookie, was told after the game he would remain with the Panthers for the remainder of the season after he played in his ninth game Saturday.

"We had to make a decision,'' Gallant said with a grin, "and if he didn't score tonight he was probably going to go back tomorrow. With the winning goal, we're going to keep him. It's official.''

After the game, Ekblad was handed the puck from his first NHL goal.

When asked if he had been given official work he was staying, Ekblad said no but gave it away with a large smile.