BJUGSTAD ON A TEAR: Panthers center has 10 goals in past 14 games ... Attendance to start picking up ... Bolland practices, returning v. Buffalo? 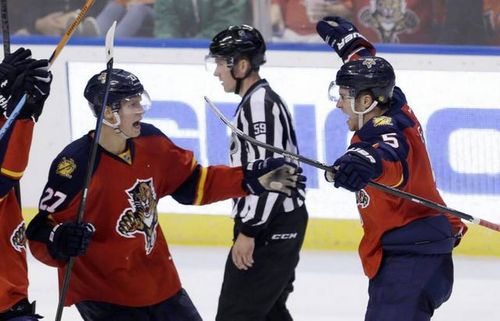 TWITTER: @GeorgeRichards
It wasn't so long ago Nick Bjugstad couldn't buy a goal with an American Express card and a PayPal account.

Florida's second-year center was getting plenty of opportunities yet missed shot after shot.

Coach Gerard Gallant noticed the quality chances and kept Bjugstad on a top line despite the lack of statistical production.

"Even when he wasn't scoring, you could see it,'' Gallant said. "He was hitting goal posts, was getting chances. I think he's maturing as a player. .-.-. The only thing I was concerned with was him getting frustrated. I was happy with how he was playing.''

Gallant's decision to have Bjugstad keep doing what he was doing sure has paid off.

Going into Saturday's game with Buffalo, Bjugstad is the team leader in goals (10) and points (15).

Bjugstad, who scored 16 goals in his first full NHL season last year, is on pace to eclipse the 30 goal mark this year.

"Percentage-wise, if you're going to create chances, the puck is going to go in eventually,'' Bjugstad said Friday, a day after scoring twice in Florida's 4-3 shootout loss to Columbus.

"At the start of the season I thought I was playing well. I was getting chances. That's what you have to do. I had a few lucky ones [Thursday], so, sometimes the puck luck goes in.''

Bjugstad, who has three multiple-goal games this season after doing it once last season, is becoming one of Florida's most consistent players.

Tough on defense as well, Bjugstad uses his big frame (6-4, 190 pounds) to drive to the net and force his shot through.

"He's a big guy who controls the puck pretty good and is a fast skater,'' said linemate Tomas Fleischmann, whose play has picked up since being paired up with Bjugstad.

On Thursday, Bjugstad's first goal came when he drove toward the net while holding off a defenseman and shoveling a shot that bounced around and slid between the skates of goalie Sergei Bobrovsky.

The second goal came in a fracas by the goalmouth as Bjugstad knocked a puck over Bobrovsky's shoulder to tie the score at 3.

"I have to produce, that's why I'm here,'' Bjugstad said. "I've been relied on to score most of my life from high school through college. Hopefully I can continue that here.''

The Panthers continue to draw small crowds to BB&T Center as the team is averaging 8,871 through the first 11 games.

With the team in playoff contention -- and big-name opponents on their way -- the team is expecting that number to rise significantly in the coming months.

The Panthers, who have cut out basically all free and discounted tickets, play host to the Sabres on Saturday which could bring the largest crowd of the season. Florida's biggest crowd so far was 11,419 for the home opener against New Jersey.

A four-game homestand which starts against Pittsburgh on Dec. 22 and includes Toronto, Montreal and the New York Rangers should change things. All four games are expected to be Florida's biggest crowds of the season.

"As a player, you don't think about the crowd during the game but I think you do afterward,'' winger Sean Bergenheim said. "You hope there would be more fans but we have to keep working hard to get some wins and get people in there. It's up to us.''

Added Fleischmann: "Us winning will have more people show up. Baby steps. When we were winning the year we made the playoffs, a lot of people were excited. We're shooting to bring that atmosphere back.''

-- Center Dave Bolland hasn't played since injuring his groin in Buffalo on Oct. 17 but took part in Friday's full practice as he continues to work on his conditioning.

Of note: Roberto Luongo has shut out the Sabres in each of his past three starts including two straight with Florida (March 7, Oct. 17). The Panthers have won four straight against Buffalo dating to last season.