« TIME TO GET SERIOUS: If Panthers want to be a playoff team, they need to act like it ... Columbus/Buffalo homestand starts Thursday | Main | BJUGSTAD ON A TEAR: Panthers center has 10 goals in past 14 games ... Attendance to start picking up ... Bolland practices, returning v. Buffalo? »

SHOOTOUT AND SHOT DOWN: Panthers dominate play for two-plus periods yet Blue Jackets prevail 4-3 in shootout ... Robak traded to Anaheim 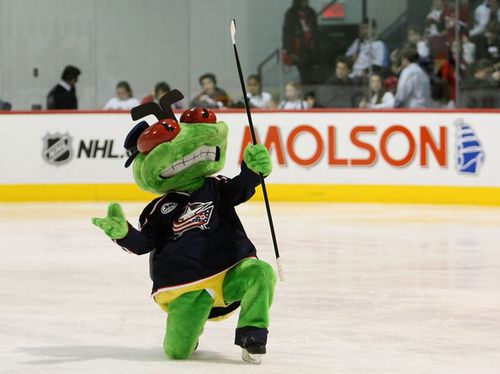 TWITTER: @GeorgeRichards
Former Panthers coach Pete DeBoer used to say his team "deserved a better fate" when it lost a game despite outplaying the opponent.
Gerard Gallant could have borrowed that quote Thursday.
Despite dominating play for two-plus periods, the Panthers never fully overcame a three-goal deficit in a 4-3 shootout loss to the visiting Blue Jackets.
Sure, Florida got a point in the standings. Yet .-.-.
"It's a disappointment,'' said Gallant, whose team has lost 10 straight to Columbus and hasn't beaten the Jackets at home since he was their coach back in 2004.
"It's great to get a point down 3-0 and you'd take that anytime. But we really wanted that two points and thought we should have gotten it. You can't get down 3-0 to any team in the league.''
Florida, which lost 2-1 in Columbus on Monday, trailed 3-0 after Boone Jenner scored for the second time this week just 51 seconds into the second period.
It was all Panthers -- pretty much -- after that.
Florida quickly responded and took aim at goalie Sergei Bobrovsky like it rarely has before.
The Panthers scored three goals on eight shots on goal in a span of 4:40 to pull even midway through the period.
In the second period, Florida had 19 shots on goal to Columbus' three yet the three goal barrage was all it could muster.
"It's a shootout kind of game once you get down 3-0 and you don't know what's going to happen,'' said Nick Bjugstad, who bagged two of Florida's goals by scoring twice in a span of 2:27.
"We came back, did a job. Everyone kind of bought in the final two periods. But we can't get down three goals.''
The Panthers' offensive charge was fast and furious although Bobrovsky was able to cool the Panthers off with a number of top saves.
In the second, Florida opened its scoring when the struggling Tomas Fleischmann buried a pass from Jonathan Huberdeau.
Just a few minutes later, Bjugstad potted his first of the night by working toward the net and floating a soft shot between Bobrovsky's skates.
Bjugstad's second goal came on the power play as he knocked a puck through to tie the score with 12:29 left in the second.
Where did that come from?
"We got ticked off,'' goalie Roberto Luongo said. The Panthers continued to assault the Columbus defense but Bobrovsky stood tall -- as he usually does against Florida.
Bobrovsky made 52 saves -- not including all four in the shootout. "He,'' Gallant said, "was the first star of the game.''
The Blue Jackets won it in the fourth round when Ryan Johansen scored.
How much did Florida control the offense on Thursday? In combining shots on goal as well as missed and blocked shots, the Panthers had 99 attempted shots. Columbus only had 35.
ROBAK TRADED
With Dave Bolland (groin) and Scottie Upshall (ankle) coming off the injured list soon, the Panthers had to clear a roster spot.
Unwilling to send Vincent Trocheck back to the minors, general manager Dale Tallon instead traded seventh-defenseman Colby Robak to Anaheim on Thursday morning.
Robak played in seven games for the Panthers this season -- including twice as an emergency fill-in on Florida's fourth forward line -- and 42 over the past four seasons.
The Panthers got back minor league defenseman Jesse Blacker as well as a conditional draft pick in return. Blacker was sent to Florida's AHL affiliate in San Antonio.
-- Thursday's announced crowd of 7,788 was second lowest in franchise history just better than the 7,311 for Ottawa on Oct. 13.
-- Florida has lost its past two games in which it rallied from a 3-0 deficit.
-- The Panthers dropped to 2-7 in overtime games this season and are 1-4 in shootouts.