« BIG NIGHT FOR LUONGO, PANTHERS: Florida rallies behind its goalie with two goals from Jonathan Huberdeau in 3-1 win at Vancouver | Main | CRAZY NIGHT IN CALGARY: Panthers get late goal from Tomas Fleischmann, hang on to top Calgary 6-5 ... Al Montoya makes big saves at the end to hold second straight win » 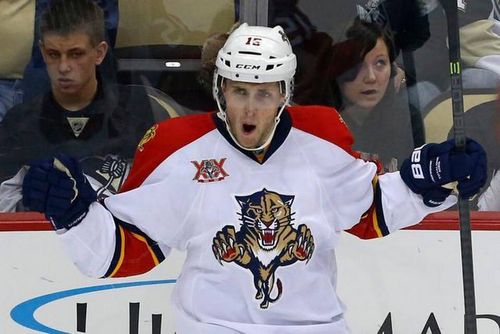 CALGARY -- The Panthers finally found a home for center Drew Shore, trading him to Calgary in exchange for former Florida draftee Corban Knight.
Shore, 23, played in 67 games with the Panthers but has been stuck in the minors since last season. Shore can play one NHL game before being waiver eligible so instead of losing him for nothing, the Panthers re-acquired Knight.
"We tried to fit him into the mix here but we've been healthy and had a busy offseason signing [Dave] Bolland and [Derek] MacKenzie,'' GM Dale Tallon said.
"We're very deep the middle. It was frustrating on both ends that we couldn't get him more action. This is an opportunity for him. I have nothing but good things to say about the kid. He's very valuable, but we have a lot of depth.''
Knight, 24, will replace Shore on the AHL San Antonio roster. Knight, who basically became a free agent when he didn't sign with Florida in 2013, played nine NHL games with Calgary.
-- Dmitry Kulikov missed Friday's game at Calgary with the flu. Erik Gudbranson returned to the lineup after missing the first three games of the road trip.