« BJUGSTAD'S HOMETOWN GOAL NOT ENOUGH: Panthers continue losing ways in Minnesota with 2-1 loss to Wild | Main | THE STARS ARE BIG AND BRIGHT: Dallas takes 2-0 lead, clamps down on Panthers in shutout win ... Costly win for Stars as Seguin, Eaves and Hemsky hurt » 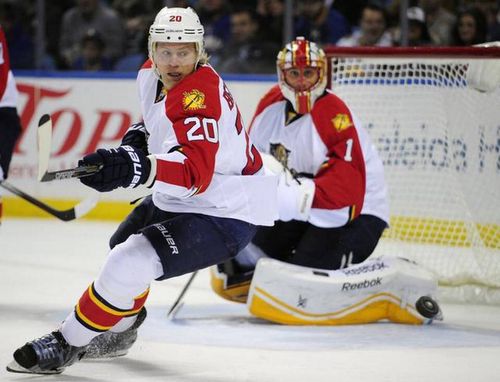 DALLAS -- Panthers coach Gerard Gallant stirred up a little controversy Friday when in explaining why Sean Bergenheim was scratched -- again -- he questioned the veteran winger's effort.
When asked if Bergenheim gave him 100 percent effort, Gallant stared straight ahead.
Then he answered: "If he gave me 100 percent, he would be playing. That's fair. But there's a few guys who didn't give 100 percent last night. You just have to make a decision."
Gallant has been steadfast in defending the veteran players (Bergenheim, Tomas Kopecky, Scottie Upshall) he's had to put on the bench lately.
He did so again on Friday, saying he had nothing against Bergenheim.
"I'm trying to win,'' Gallant said. "When I made my decision with my coaches, it was only who gives us the best chance to win.''
Bergenheim said Friday he requested a trade from the Panthers earlier this month when he was a healthy scratch in three straight games.
He said Gallant never came to him with questions about his effort -- and he disagreed with that assessment.
"All I've done is give everything I have every time I'm on the ice,'' Bergenheim said.
"I've played as hard as I can for the Panthers. So to read something like that is upsetting. [Gallant] didn't say anything; he told me I wasn't playing but didn't say why. I got comments from some assistant coaches who said they liked the way I played, said I 'was flying.' I tried. What can you do?
Bergenheim asking for a trade isn't much more than a formality as the Panthers have been shopping him around. A pending free agent on July 1, Bergenheim's days with the Panthers were already numbered -- only now his exit seems to have been accelerated.
"I wish none of this would have come out,'' Bergenheim said. "When I asked for a trade, I thought everything would be kept -- as it should -- within the team. This shouldn't have been done this way.
"I just want to play. And this could be good for the Panthers. Maybe they get something in return that helps them become a better team."
As Bergenheim notes, Florida has a number of pending free agents. Perhaps not coincidentally, they've also been healthy scratched in the past few weeks. Gallant said Friday that GM Dale Tallon has not made any demands of who is in or out of the lineup.

"I think from the Panthers side, well, they've known about the situation and it's not just about me,'' Bergenheim said.

"They have to make some decisions and I'm one of those. I want to play hockey, play somewhere where my style of play is valued and appreciated.''
When asked if he would be surprised to be traded, Bergenheim didn't flinch.
"No,'' he said. "I don't know the full timeline of it, but they have to make a decision. Whatever they decide, they decide.''