« MAKING IT COUNT: Steven Kampfer has made most of opportunity with Florida Panthers | Main | DAN ELLIS: Up for the challenge as Roberto Luongo's status remains in question ... Aaron Ekblad sets Florida rookie record ... No price increase for season tickets »

BACK ON THE ICE: Roberto Luongo returns to work out, hopes to be back Thursday against Winnipeg 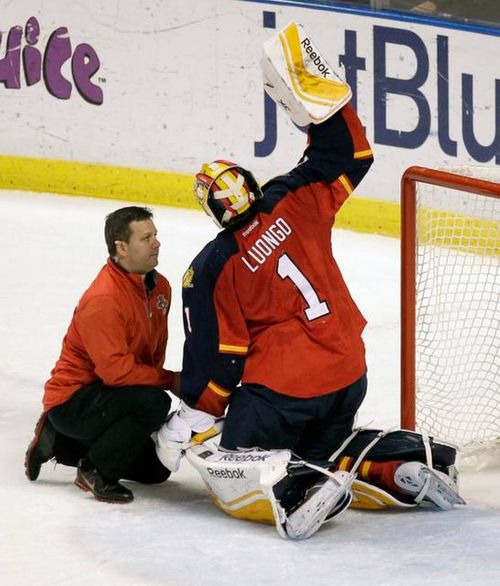 TWITTER: @GeorgeRichards
Roberto Luongo was back on the ice Monday for the first time since injuring his right shoulder in last week's loss to the Maple Leafs.
Whether Luongo returns to action Thursday remains to be seen.
"It's no more than day-to-day,'' coach Gerard Gallant said. "[Thursday] is the goal and the hope but we'll see how he gets along.''
Luongo worked with goalie coach Robb Tallas before Monday's practice and didn't take live shots from teammates.
As the Panthers worked their way onto the ice for their workout, Luongo was already back inside leaving Dan Ellis and Sam Brittain to handle practice.
"It was mostly just to get my legs going, there really wasn't any action on the right side of my body,'' said Luongo, speaking publicly for the first time since Tuesday's strange turn of events.
"I wanted to feel the ice, it had been a few days and you don't want to be away from the ice too long becaue it makes it that much harder to come back.
"I would love to [play Thursday] but right now it's too early to tell. There's been some improvement over the past 24 hours but the next two days will be key to see if I'm able to play on Thursday. It's not comfortable. But it has gotten better over the past 24 hours so that's encouraging.''
Last week, Luongo was hurt when a wrist shot from Toronto's Leo Komorov caught him square on the shoulder in the first period.
Luongo finished the period but looked to be in discomfort and didn't return for the second.
"It caught me in a spot at a weird angle, I was turned sideways a little bit and caught me where there was no equipment,'' Luongo said. "It was straight on.''
Backup Al Montoya replaced him but pulled a groin muscle at the start of the third period. In obvious pain, Montoya left for a few minutes leaving the Panthers scrambling to find a replacement.
At first it appeared Tallas was going to come in, but confusion from the league and on-ice officials led to forwards Scottie Upshall and Derek MacKenzie volunteering to suit up and go in net.
The verdict was MacKenzie would do it if needed.
"We played rock, paper, scissors for it,'' Upshall said Monday.
Montoya returned to the game as Luongo left the arena to get a CT scan at nearby Cleveland Clinic in Weston and wasn't an option initially.
Luongo said he was back in the car driven by a team doctor when he heard what was going on.
Heading back to the arena was Luongo's first thought.
"I saw [Toronto] had tied the score and was like 'aw man','' Luongo said.
"So I transferred over to Twitter to see what was going on and all of a sudden saw they were going to put Mac or Uppie in so I told doc 'step on it, we need to get back.' There was a lot of confusion on Twitter, I could only imagine what was going on in the locker room.
"I wasn't sure what was going to happen once I got back but when I saw [Tallas'] face I knew I better get dressed as quick as possible."
Once he returned to the arena, Luongo headed to the tunnel to plead his case to Gallant and general manager Dale Tallas. Luongo ended up coming in with 9:08 left and finished the game.
"Obviously it was a situation where I could do a better job that Montoya because of his injury,'' Luongo said.
"It was tough to watch him go through something like that. At least my legs were working. I went out there, tried to help out the team a little bit. Luckily there wasn't much action and the shot had kicked in. I was feeling OK. I didn't use my arm too much, kept it guarded.''
FLU BUGGED
The flu bug that has ravished the Panthers last week seems to be gone.
Aaron Ekblad and Tomas Kopecky, who missed Saturday's win over the Islanders because of illness, were both back Monday.
Dave Bolland, out all last week, returned Monday and centered Florida's second line because Nick Bjugstad was given another day off after he took a hard shot off the chest in the Toronto game.
Bjugstad played in the past two games but hasn't been practicing.
"Maintenance day again,'' Gallant said. "There's still a little soreness.''
-- The Panthers won't be on the ice Tuesday but instead will hold off-ice workouts. Florida returns to the IceDen in Coral Springs on Wednesday.