« SCOTTIE UPSHALL: Glad to be with the Florida Panthers | Main | MORE ON REPLACEMENT GOALIE » 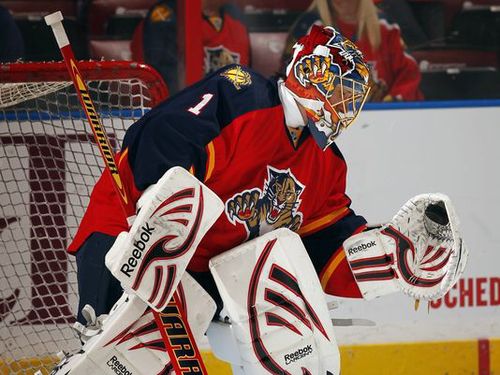 TWITTER: @GeorgeRichards
The Panthers went from starting their All-Star, future Hall of Fame goalie Tuesday to going with their backup.
They almost ended up putting in the guy selling Molsons in Section 132.
OK, things weren't that bad although Florida was forced to suit up goalie coach Robb Tallas -- who hasn't played an NHL game since 2001 -- in a deflating 3-2 loss to the Maple Leafs.
"We had communication with the league and had to get Robb legal to go in,'' general manager Dale Tallon said. "It's rare, this doesn't happen very often."
Tallas, who never went in as Roberto Luongo returned after a first period injury, was approved by the NHL to be Florida's emergency backup after Luongo hurt a shoulder in the first period and Al Montoya appeared to pull a groin muscle early in the third.
Montoya returned to the game after a lengthy delay early in the third period as Florida and league officials tried to work through the mess and figure out who was eigible and who was not.
Montoya was obviously hurt and gave up the game-winning goal to Peter Holland with 14:32 left.
With Tallas in the tunnel and in uniform, Luongo -- who had appeared in his dress clothes -- talked coach Gerrard Gallant into going back in.
While Montoya killed time best he could, Luongo got suited up and returned to the game with 9:08 left.
Toronto didn't score again -- but neither did the Panthers.
Florida remains two points back of Boston for the final playoff spot in the Eastern Conference with the Bruins playing two fewer games.
Toronto had lost 16 straight road games -- dating to New Year's Eve -- before topping the Panthers.
"We were really concerned, playing a good game and lose both goalies boom, boom,'' Gallant said. "There was a lot of confusion going on.''
Montoya returned to the game in obvious pain and was lauded by management and teammates alike for returning.
Gallant said Montoya was "hurting pretty good" and Tallon confirmed Florida would recall a goalie from its minor league affiliate -- likely former NHLer Dan Ellis -- immediately.
"We have to bring a goalie up,'' Tallon said. "We'll see what happens after the medical report.''
Aside from Florida's goalie issues, its scoring issues popped up again as Jonathan Bernier slammed the door in the third.
The Panthers led 1-0 on a Brandon Pirri goal early with Aaron Ekblad making it 2-1 in the second.
Montoya was hurt trying to stop Nazem Kadri on his game-tying goal 22 seconds into the third forcing the Panthers to scramble and try and find an emergency goalie.
Both Scottie Upshall and Derek MacKenzie were considered, with MacKenzie going as far as to head back to the locker room to change.
Tallon, meanwhile, was working with the league to get Tallas approved to play. Tallas served as an emergency backup during warmups and the first period of a game against Carolina when Jacob Markstrom's equipment was late to arrive.
Tallas, Luongo and Montoya were unavailable for comment.
"We have to be mentally strong, try and keep pucks away from them,'' Pirri said. "We're not even close to being happy about what happened. We want that playoff spot.''