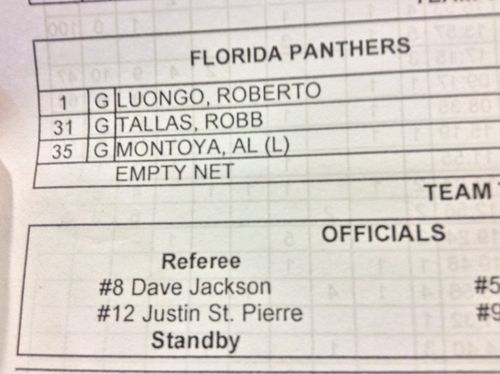 This comes from the NHL:

Panthers goaltenders Roberto Luongo and Al Montoya both sustained injuries during the Maple Leafs/Panthers game. According to Rule 5.3, "In regular League and Playoff games, if both listed goalkeepers are incapacitated, that team shall be entitled to dress and play any available goalkeeper who is eligible. This goalkeeper is eligible to sit on the player’s bench, in uniform. In the event that the two regular goalkeepers are injured or incapacitated in quick succession, the third goalkeeper shall be provided with a reasonable amount of time to get dressed, in addition to a two-minute warm-up." In this situation, the League approved Florida's request to dress goaltending coach Robb Tallas.

"For our third goalie to go in, Robb Tallas, paperwork had to be cleared by the league before he could go in. The last time we did it, it was expired. It was a one-time PTO (pro tryout) and it had expired.

"We had [Derek MacKenzie] and Robb getting dressed.

"This is rare, it doesn't happen very often. We were in constant communiation with the league to do the right thing. You have to have him be legal, has to be cleared by Central Registry and that's hard to do at 11 o'clock or 10:30. Whatever.

"We had time, but I eventually you have to get someone cleared to play. If [Tallas] wasn't cleared we would have put a player in. And we probably would have decided not to have a goalie in there.

"[Montoya] is a lower body injury, Louie is an upper body injury. We have to bring up a goalie for practice tomorrow just to be sure. You may have to suit up.''