« RECALL NOTICE: Panthers call up Dan Ellis and Sam Brittain as they await word on severity of injuries to Roberto Luongo and Al Montoya | Main | SICK AND TIRED: Panthers battle illness, injury but keep pace with Boston in 4-3 shootout loss to Dallas ... Roberto Luongo injury not thought to be long term » 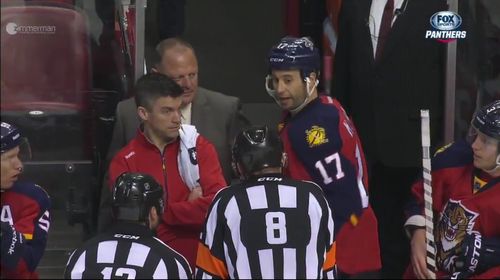 With much confusion over whom the Panthers could bring in to play goalie Tuesday, center Derek MacKenzie was tabbed as the player who would do so if needed.
When Montoya got hurt, goalie coach Robb Tallas, 41, was ready to go in. Problem was, he wasn't cleared by the NHL to be an eligible player and wasn't allowed on the ice by the on-ice officials.
That led the referees to tell the Panthers they needed to replace Montoya with someone who was on the active roster and currently in the game.
MacKenzie, who said his only goalie experience was goofing around during informal practices during the 2012 lockout, went into the locker room to change.
"I was ready to go out there and was debating in my mind whether to shuffle the crease like I knew what I was doing or just stumble out,'' MacKenzie said.

As for why he was chosen over Scottie Upshall: "It was a close game, you want the guys who can put the puck in the net out there on the ice trying to do that.''
He says he couldn't wear Roberto Luongo or Al Montoya's gear because it was too big, so he needed Tallas' equipment.
"I was down to putting on the chest protector when they changed their minds again,'' MacKenzie said.
The two trading gear led to even longer delays.
Montoya ended up returning to the game although he left the ice a second time leading to a delay of over 30 minutes. Tallas was finally cleared by the NHL and was on the bench as the backup for the final 16-plus minutes of game time. MacKenzie put on his regular gear and returned to the ice.
Although it appeared MacKenzie was fighting with the officials before going off to the locker room, he says he was just warning them not to expect to much -- and to help protect him.
"I told them if anything came within three feet of the red line, they better blow the whistle for icing because I would be going back there,'' MacKenzie said.
As for Tallon saying the Panthers were considering going with an empty net instead of putting a forward like MacKenzie in there, MacKenzie smiled.
"I don't blame him,'' he said. "Everyone was concerned about another injury out there. Lou came out and stood up for us. He did us a big favor. Seeing both guys go out in a game is hard to process.''
-- Tallas previously suited up for a game in 2013 when Jacob Markstrom's equipment was delayed coming into Fort Lauderdale airport. Tallas took warmups and backed up Scott Clemmensen for the first period.
That game was exactly two years ago Tuesday.
"Next March 3rd I will be nowhere near a hockey rink,'' Tallas wrote on his Twitter account late Tuesday night.