RECALL NOTICE: Panthers call up Dan Ellis and Sam Brittain as they await word on severity of injuries to Roberto Luongo and Al Montoya 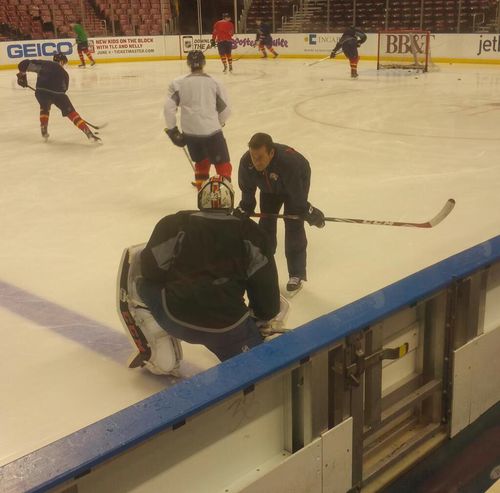 TWITTER: @GeorgeRichards
With both of their primary goalies hurt, the Panthers quickly got to work and brought up a pair of replacements.
Whether this is a long-term solution or just a quick fix remains to be seen.
If Florida still wants to make the playoffs, it better hope this is nothing too serious.
Roberto Luongo injured his shoulder in the first period of Florida's 3-2 loss to Toronto on Tuesday night after being struck by a puck.
Luongo left the game during after the period and left the arena to get a CT Scan at Cleveland Clinic in Weston. When he heard backup Al Montoya got hurt trying to make a save early in the third, he raced back to BB&T Center and eventually returned to the game with nine minutes left in the game.
The extent of Luongo's injury isn't known as he continued to seek treatment by specialists on Wednesday.
Luongo and Montoya weren't available for comment.
"He's day-to-day right now and don't think it's as serious as we thought [Tuesday],'' coach Gerard Gallant said Wednesday.
Montoya appeared to injure his groin and he was limited upon his return. Gallant said "I don't think it's too serious but I don't know a whole lot."
The Panthers didn't have many options on Tuesday with 41-year-old goalie coach Robb Tallas (99 games over six NHL seasons) eventually signing a pro-tryout contract to be eligible to play if needed.
Tallas was back on the ice Wednesday in a coaching capacity with veteran Dan Ellis recalled from AHL San Antonio and rookie Sam Brittain brought up from ECHL Cincinnati.
Ellis will start Thursday against Dallas. Coincidentally, that game comes on the one-year anniversary of Florida acquiring Ellis in a trade with the Stars for Tim Thomas.
"This [Florida] team has shocked the league a little bit and they haven't gotten the credit for what they've done,'' said Ellis, who was with the Rampage for its series in Charlotte, North Carolina, when he got the call to come to South Florida.
"People have written the Panthers off yet here they are, competing night after night against the best teams in the league and winning. They've proved a lot of people wrong and it's great for the city because they want to see playoff hockey.''
If Luongo is hurt long-term, the Panthers do have some options -- none of which are as good as having a healthy Luongo.
Florida is currently two points back of Boston for the final playoff spot and can't afford to have its MVP on the shelf for the final 18 games.
Although the trade deadline passed Monday, General manager Dale Tallon could still acquire another goalie via free agency although that cupboard seems pretty barren.
The Panthers could also run with Ellis until Luongo is back. Ellis, who struggled with Florida at the end of last year, lost his backup job when Tallon signed Montoya to a two-year deal in July.
Ellis has been strong at times with San Antonio as he has accepted his role as a minor league goalie with class.
Ellis, 34, has gone 22-11-3 with the Rampage. He has played in 204 games over seven NHL seasons.
"Dan Ellis is an NHL goalie, we know that,'' Gallant said. "He's played a lot of games in the league and he's won a lot of games He's a good player, a good person. We know that. He'll work hard and give us a chance to win. That's all we ask.
"He's done a great job in San Antonio where it was a tough situation, an NHL goalie going down there. But he's worked hard and battled hard. Now he gets his chance again.''
-- Willie Mitchell is expected to return to the lineup after missing the past 15 games.
Center Nick Bjugstad was struck by a puck in the chest Tuesday and didn't practice Wednesday. He should play Thursday.
Thursday: Stars at Panthers
When, where: 7:30 p.m.; BB&T Center, Sunrise
TV/Radio: FSFL; WQAM 560
Series: Florida leads 13-12-3
Noteworthy: Dallas won the first meeting 2-0 on Feb. 13. The Stars are without leading scorer Tyler Seguin who was hurt on a low hit from Florida's Dmitry Kulikov. Dallas has lost seven of nine since to drop out of the playoff race.