WILLIE MITCHELL: We haven't done anything, but don't disrespect the Florida Panthers 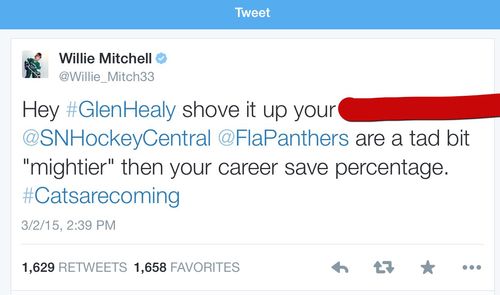 TWITTER: @GeorgeRichards
Panthers captain Willie Mitchell said he heard Sportsnet analyst Glenn Healy disrespecting the Panthers during SN's trade day coverage Monday and decided he couldn't let it sit.
Mitchell sent out a tweet directed at Healy that got plenty of play as it spiced up a fairly lame trading deadline.
When SN saw the tweet, it wasn't ignored and was brought up during a roundtable discussion.
Former Panthers coach -- and part-time South Florida resident -- Doug MacLean jokingly stuck up for his former team as he is never one to turn down a chance to rib Healy.
On Tuesday, Mitchell explained why he came out in defense of his team through social media.
"We're not satisfied with what we've accomplished by no means,'' Mitchell said. "We have one goal and that's to make the postseason and we've said that from the beginning of the season. We've worked our tails off. Ownership has given us a chance. I just thought it was uncalled for from the outside to discredit what we've done to this point.
"Again, we haven't accomplished anything, but, we were a last place team in the league and we're fighting with a team that won the Stanley Cup not that long ago. I thought it was uncalled for. We talk about the positive things in the Florida market. We're playing better, we're in every game. We try to do things the right way. I think people are seeing that.''
Mitchell added that there's a challenge of playing in a non-traditional market especially one like South Florida. He says he and his teammates relish the opportunity to get things right here.
"This group really likes that challenge, we embrace that,'' Mitchell said. "Everyone says hockey in Florida doesn't work, the Florida Panthers have never been a team to contend with. We have a lot of work to do to [disprove] that to our peers. The most important thing is when teams around the league know its not a lay-up in Florida. I know in playing against them last year, we're a different hockey club.''
Mitchell, who has been on the injured list for the past few weeks, says he was aiming to play Tuesday against the Leafs but is now hoping for Thursday.
"Some injuries [hang] around and this one has,'' he said. "I feel good, should be in the next game. I was trying to vouch for this one but the medical staff are pulling back the reigns a bit. You should see me in the next one.''
Dave Bolland, also on the IR, didn't skate Tuesday as coach Gerard Gallant says he was fighting the flu.