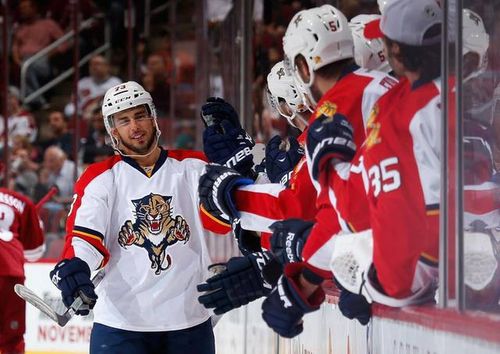 Florida GM Dale Tallon joked that Brandon Pirri is gunning for the 2015 Cy Young Award as the sniper put up numbers befitting a top-end starting pitcher: 22-2.
Of course, that's goals and assists not wins and losses. Numbers this lopsided may have been a commonplace in the old Original Six era of the NHL but sure aren't seen in hockey these days and gives Pirri one of the strangest stat lines in the history of the NHL.
According to STATS, Pirri had the biggest gap between goals-to-assists since Cy Denneny had 22 goals and just one assist for Ottawa in 1923-24.
"It's kind of strange and I can't even explain it,'' said Pirri, who had 13 goals and 12 assists for the Panthers and Blackhawks last season.
"Both of my assists weren't even passes. It's very strange. Next year I'll get some more assists.''