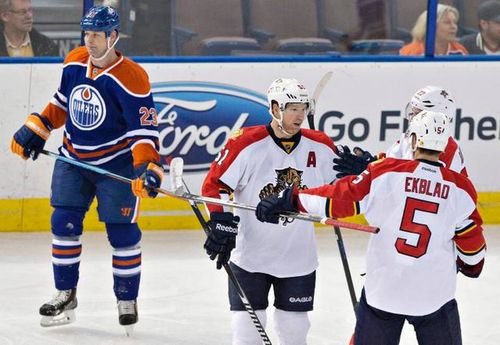 TWITTER: @GeorgeRichards
Over the past decade, the Panthers have had two defensemen who just refuse to take a night off.
First it was Jay Bouwmeester, who played in 342 consecutive games before leaving the Panthers in 2009.
Today, Brian Campbell holds the team's 'Iron Man' status.
On Thursday, Campbell played in his 300th consecutive game (not counting 14 postseason contests) including all 290 games since joining the Panthers in 2011.
In 2010, Campbell -- then with Chicago -- had played in 377 straight games before he suffered a broken clavicle and rib from an Alex Ovechkin hit.
Campbell's latest streak started in a game against the visiting Panthers on March 23, 2011.
Bouwmeester holds the record for consecutive games played by a defenseman at 737, a run that ended earlier this season.
"I just try to take care of myself on and off the ice,'' said Campbell, who last missed a game March 20, 2011 in Arizona.
"I've been lucky in my career and have had other streaks. I think it takes a lot of preparation and sometimes you don't feel so good. I've played through injuries. I think it's a challenge and try and embrace it. I want to be out there every night. For me to take a night off, it's going to have to hurt pretty good.''
Campbell is one of only three players remaining from the 10-player roster makeover engineered by general manager Dale Tallon in 2011.
Both Campbell and Tomas Kopecky arrived via a trade at the draft that year with eight others either signing during free agency or coming over in a trade (Kris Versteeg).
Of those 2011 free agents, only Scottie Upshall remains.
"We were part of a rebuild, brought in to try and change the culture here and I think we've accomplished that,'' Upshall said.
"We've had some great young players come through the past few years and it has been an honor to see them grow into adults and fine hockey players. We're all it in together.''
In their four seasons in Sunrise, Upshall, Campbell and Kopecky have enjoyed high times (making the playoffs in 2012, this season's potential for 90-plus points) as well as the lows (a last-place finish in 2013 and finishing 29th last season).
"It does go by quick especially when you factor in a lockout-shortened season,'' Campbell said.
"The first year here was a lot of fun. There have been a lot of ups and downs but hopefully we've picked it back up again. Hopefully there's more stability now. But I miss those guys. We had a good group and a lot have moved on.''
-- Al Montoya worked with goalie coach Robb Tallas and strength coach Tommy Powers before Thursday's morning skate and participated in Friday's full practice with Roberto Luongo taking the day off.
The Panthers are hopeful Montoya, who pulled a groin muscle against Toronto on March 3, could be ready to play by next week.
"He's not ready to go into a role with the team just yet,'' Gallant said. "He's been skating for the past week. I think everything has gone OK. When he's ready, we'll see what happens.''
-- Upshall has missed the past two games after "taking a nice spill" against Ottawa on Sunday. Upshall has skated the past few days and said Friday he should be ready to return to the lineup Saturday.
"I've been feeling good,'' Upshall said. "I hope to jump back in.''
TB@FLA
When, where: 7 p.m.; BB&T Center, Sunrise
TV/Radio: FSFL; WQAM 560
Series: Panthers lead 58-48-10
Noteworthy: The Panthers snapped a long home losing streak (2011) to Tampa Bay with their 4-3 win in Sunrise on March 1. The Lightning are finishing off a five-game road trip with losses in three of its first four.