COMING TO A CLOSE: Roberto Luongo may be Florida Panthers MVP, but Dmitry Kulikov has strong comeback season ... Erik Gudbranson likely out v Devils as Al Montoya looks for final start of the year 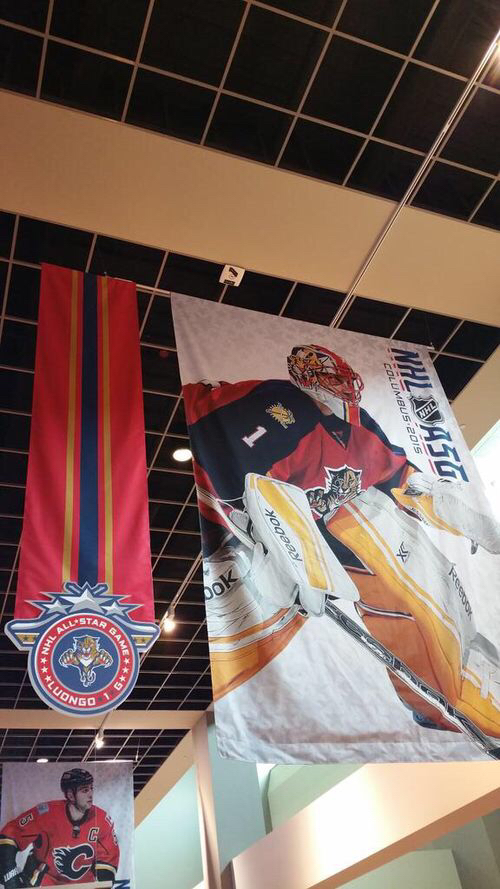 As the Panthers play their final game of the season Saturday against New Jersey, there isn't much debate who their Most Valuable Player was in 2014-15.

Goalie Roberto Luongo gave the Panthers a chance to win almost every game, many nights keeping Florida in the mix despite its lack of scoring.
On Thursday, the team honored Luongo with a pregame ceremony to celebrate his 400th NHL victory -- 141 coming with the Panthers -- before he went out and made 34 saves in a 4-2 win over the Bruins.
"He's played great hockey, has been our MVP, our best player most nights,'' coach Gerard Gallant said Friday morning.
"He's everything I could ask for as a coach. He's been great.''
If there was an award for most improved player on the Panthers, a strong case has to be made for defenseman Dmitry Kulikov. 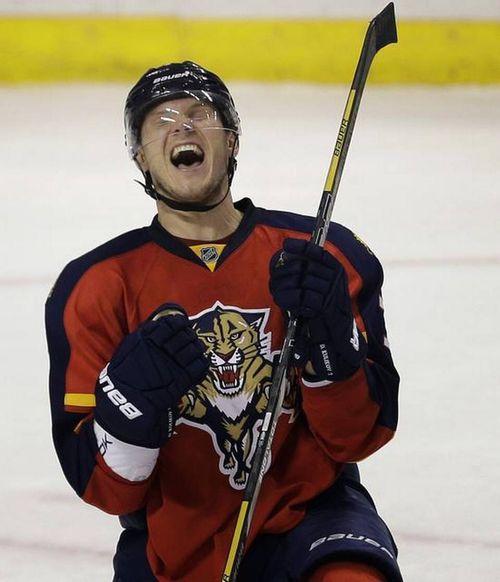 At the start of last season, Kulikov was struggling on both ends of the ice, coughing up the puck in his own zone while having defensive lapses in the other.
Things got so bad then-coach Peter Horachek benched Kulikov as rumors of an eminent trade swirled.
General manager Dale Tallon denied Kulikov was headed out of South Florida -- the Avalanche were mentioned as a probable landing spot -- and things suddenly started to get better.
Kulikov was a much stronger player in the second half of last season than he was in the first and that carried over this year.
"He's definitely become more consistent, more steady and can handle any minutes you give him,'' Brian Campbell said. "He came into the league pretty early and has done some good things. I think that's going to continue.''
The Panthers not only didn't trade Kulikov during the offseason but signed him to a three-year deal worth $13 million taking him through his first year of free agency.
Tallon recognized the talent the strong-skating Kulikov possesses and this season, the defensive miscues were rare. Handling the puck became strength, not a weakness.
"I think it's been a solid year on the defensive end, learning from a veteran like Willie Mitchell has helped me more solid, more responsible,'' said Kulikov, who has 21 points in 72 games and is a minus-1 after being minus-26 last year.
"I feel like I had a good NHL season. It wasn't great but it wasn't bad. I'm going to work on being better. I want to be great. I don't know what it's going to take but I'm going to work on it."
Kulikov is, somewhat surprisingly, Florida's most tenured player within the organization. A first round pick in 2009, Kulikov is on his fourth head coach and plenty of new teammates and defensive partners.
Kulikov plans on playing for Russia in the World Championships then spend a month in Toronto working at Gary Roberts' camp before coming back to Florida in August.
"I think it's great any time you get a chance to represent your country,'' Kulikov said. "You want to give it your all. It's the dream of every kid.''
GUDBRANSON OUT
Defenseman Eric Gudbranson was slammed hard into the boards by Boston's Brett Connolly early in the first period Thursday and left the game.
Gudbranson didn't skate Friday and is likely to miss Saturday's finale against the Devils. Steven Kampfer will replace him in the lineup.
-- Players who appear in 1,000 NHL games are awarded a silver stick from the league. Thursday, the Panthers presented Luongo with a silver goalie stick for his 400th win. The stick was as heavy as it looked, apparently. 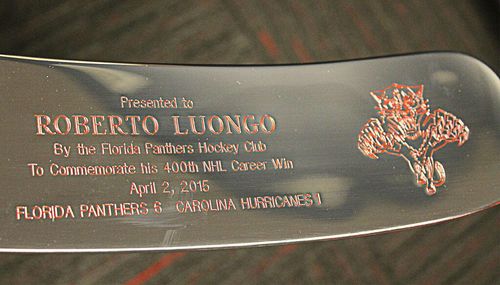 "I probably hurt my shoulder again just lifting it,'' Luongo joked.
-- Thursday was likely Luongo's final appearance of the season with backup Al Montoya ready to play. Montoya has missed the past month with a groin injury.
"He's been working hard,'' Gallant said. "If things work out, it'll be good to see him play a game before the season is over.''
-- Saturday will be Jaromir Jagr's first game against the Devils since being traded from New Jersey to Florida in February. Jagr scored in Jersey's 3-1 win over the visiting Panthers on Jan. 31. 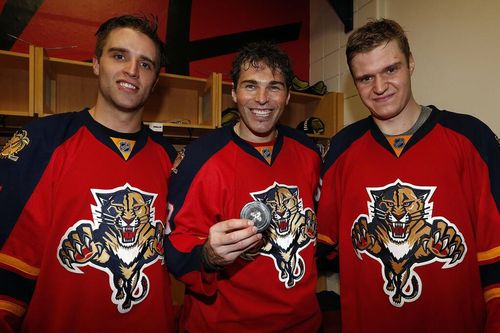 "I didn't have any control [in being traded to Florida] and maybe I'm happy I didn't,'' Jagr said. "Maybe if I would I would have made a different choice. Sometimes the best things happen when you just let go.''
NJ@FLA
When, where: 7 p.m.; BB&T Center, Sunrise
TV/Radio: FSFL; WQAM 560
Series: New Jersey leads 51-27-7
Noteworthy: The Devils have beaten the Panthers in both meetings -- including a 5-1 win in Florida's home opener. The Panthers say they are giving out $50,000 worth of prizes in Saturday's 'Fan Appreciation Night.'